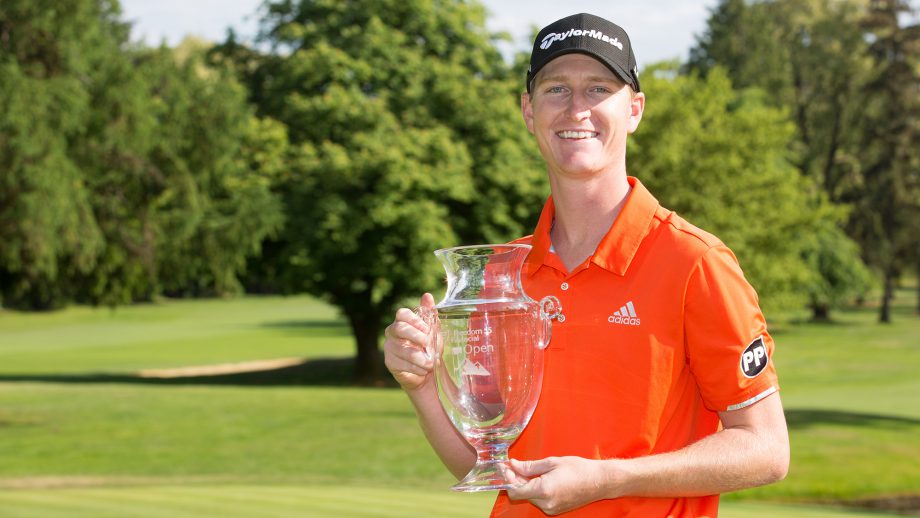 VANCOUVER — Jordan Niebrugge putt the lights out this week at the Freedom 55 Financial Open at Point Grey Golf and Country Club. That was fitting since, while growing up, that was the only club the Bridgeton, Mo., golfer had in his bag.

At age 3, Niebrugge didn’t receive a wedge from his dad until he could prove he was able to two-putt on the green, and after that he didn’t own a long iron until he could get up and down from anywhere around the putting surface.

Twenty-one years later, with his parents beaming from outside the ropes, Niebrugge tapped in for par on the 72nd hole to win his first professional tournament, shooting rounds of 68-66-68-72 to win by two strokes.

Niebrugge went into the final round in a unique position, up five strokes on the field with the finish line just 18 holes away.

“I knew I was playing great golf, and I knew if I took care of what I needed to, I’d be standing here at the end, and for the most part I was able to do that,” said Niebrugge, who towers over most at 6 feet 4 inches.

“I guess that’s why you build a big enough lead, so you don’t have to make all the putts coming in.”

Niebrugge built his lead on a two-and-a-half-round stretch of bogey-free golf from the second round until the final round’s ninth hole. It was the back nine Saturday, when Chris Williams and Zach Wright faltered, that Niebrugge made his biggest move, shooting 33 to head into Sunday at 16-under.

Based on his scores the first three days, while Niebrugge may not have been sniffing the roses on Sunday, he was able to do what he does best, not overthink the game and take advantage of opportunities when they presented themselves.

For the fourth consecutive day, Niebrugge birdied the first hole to boost his confidence. Another on the third helped last year’s runner up at this event make the turn in 35 strokes. From there, not even a couple of closing bogeys on 16 and 17 could prevent Niebrugge from lifting the trophy.

“I like the golf course, it’s right in front of you,” said Niebrugge. “I hit a lot of 3-irons off the tee and had a lot of wedges and 9-irons in. I knew I was hitting it great going into the green, so I just had to get those chances.”

Niebrugge elected to defer Monday’s opportunity to qualify for the U.S. Open in order to prepare for the Web.com Tour’s Rust-Oleum Championship taking place next week in Mundelein, Ill.

Meanwhile, Riley Wheeldon of nearby Richmond, British Columbia, shot his third 70 of the week to tie for 10th and win the year’s first Canadian Player of the Week Award.