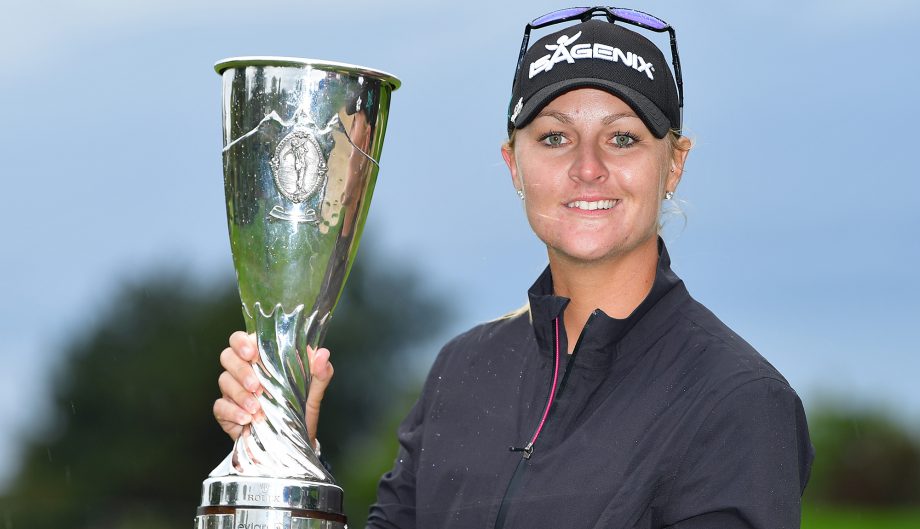 Nordqvist took the fifth and final major of the season by sinking a 4-foot putt for a bogey 5 on the soaked 18th hole while the 102nd-ranked Altomare had a six.

Course workers removed pools of standing water from the 18th green as the players approached the putting surface after their third shots. The par-4 hole played long all afternoon and was near-treacherous for the playoff.

“I am from Sweden and I’m freezing,” said Nordqvist, who was confined to bed for two weeks in July by a bout of mononucleosis. “I feel like I’m pretty used to bad conditions and that was probably some of the worst I’ve seen.”

Altomare got $340,000 for only her second career top-10 finish, three weeks after she secured a third-place tie at the Portland Classic.

“It’s really big,” the 26-year-old Massachusetts native said. “I had a good week in Portland … and I felt like I could now start getting some good finishes.”

Nordqvist and Altomare both shot 66 for 9-under totals of 204. It was a 54-hole event after weather-affected play on Thursday was scrapped.

Second-round leader Moriya Jutanugarn of Thailand and two-time major winner Lydia Ko of New Zealand fell out of the playoff by dropping shots on the 18th.

Jutanugarn (72) and Ko (69) finished in a tie for third with Katherine Kirk of Australia, whose 70 included bogeys at the 16th and 17th as the chilling rain fell.

Canadian Brooke Henderson (72) finished in a tie for 58th.

Last year, Nordqvist lost a playoff for the U.S. Women’s Open after a rules violation on the second extra hole – for touching sand with her club in a fairway bunker – was relayed to her on the next hole. Brittany Lang of the U.S. won that major title.

Victory seemed far away when Nordqvist dropped two shots early in her round to fall seven behind Jutanugarn.

“Winning didn’t really come into my mind,” the 12th-ranked winner said, until making three birdies and an eagle-3 between the 12th and 16th holes.

Jutanugarn was seeking to follow her younger sister Ariya, the 2016 Women’s British Open winner, as the first siblings ever to each win a women’s major title. Ariya, who missed the cut, walked with her sister for Sunday’s round.

Starting with a one-shot lead, Jutanugarn reached the turn two ahead at 10 under but lost her lead when Nordqvist surged. While the 23-year-old Thai was making bogey-6 at the 13th, Nordqvist made an eagle-3 and birdie to be alone on 10 under.

Nordqvist fell back on the 18th, getting a bogey-5 after pulling her tee shot into the rough. Behind her, Altomare sank a short birdie putt at 17 to advance to 9 under.

It was soon a five-way tie for the lead when Kirk birdied the par-5 15th and Jutanugarn’s birdie putt rolled round the rim.

“A lot of lip-outs. Just probably not really my day,” Jutanugarn said.

In her final round as a professional before retiring, two-time Evian winner Ai Miyazato shot 73 to finish 1 over.

A nine-time winner on the LPGA tour, the Japanese star never claimed a major title. Her wins at Evian came before it was upgraded in 2013.

On the 18th green, Miyazato holed a short par putt then was greeted greenside by Gary Player who presented a bouquet of pink roses.

“When I see all my friends behind the 18th green it almost makes me cry, so I tried not to watch them,” said the 32-year-old Miyazato.