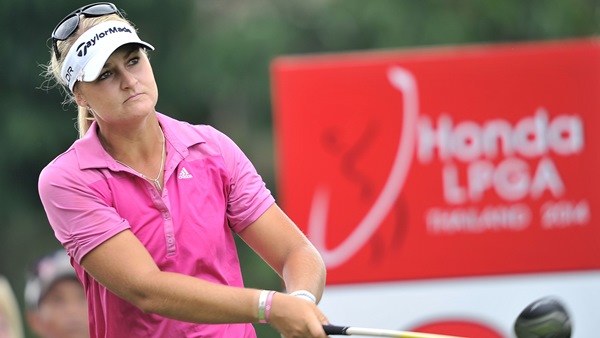 CHONBURI, Thailand – Swede Anna Nordqvist shot a 5-under 67 at the LPGA Thailand on Saturday for a 4-stroke lead over top-ranked Inbee Park and Michelle Wie.

The 27th-ranked Nordqvist sprinkled her third round at the Siam Country Club with four birdies and an eagle on the 10th against a bogey on No. 5.

Leading since the first round, the 26-year-old Nordqvist has an overall 11-under 205. She is chasing her first win on the U.S. LPGA Tour since 2009.

“I think the great players out there, Inbee, Stacy (Lewis), they’ve been up there so many times, so they look pretty comfortable out there,” Nordqvist said. “For me, it’s a matter of keep putting myself in those positions and the win will happen eventually.”

Defending champion Park, playing her first tournament of the season, birdied the opening two holes and Nos. 10-13, with a lone bogey on the eighth.

“I hit a lot of great irons shots out there today, I think I still left four birdies out there,” the four-time Major champion said.

The 2010 runner-up Wie had an error-free round.

“Couple hard pins, couple easy pins. Didn’t really take advantage of the par 5s like I wanted to, but I can’t really complain about it. Hopefully tomorrow I’ll just have a lot more birdies,” Wie said. “I really want that win, but I’m not going to put the added pressure on myself.”

Paraguay’s Julieta Granada (71) was a further stroke behind in fourth.