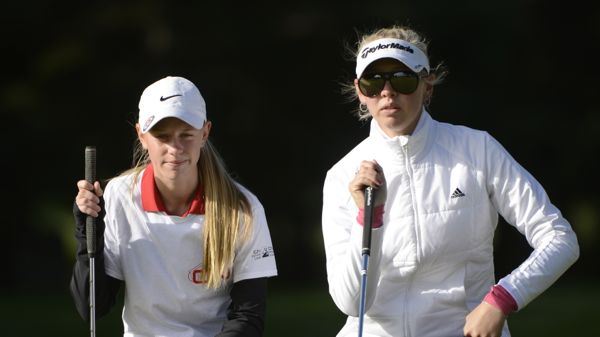 Meghan McLean’s summer has been far busier than the average 14 year old’s. McLean, who is a member at Ken-Wo Golf and Country Club and will attend Horton High School in the fall, recently returned from a trip to the CN Canadian Women’s Open at Royal Mayfair Golf Club in Edmonton.

McLean earned the chance to attend the LPGA Tour event which is conducted by Golf Canada when she won the skills competition at the CN Future Links Atlantic Championship at Antigonish in July.

“There were a variety of different things we did for the skills competition which happened during the practice round day, we were tested for shots off the tee, chipping, putting stuff like that” explained McLean.

The top four players in the skills competition earned the right to be able to caddie for one hole and make a putt during the Championship Pro-Am at the CN Canadian Open, along with tickets to watch the tournament.

“I actually finished fifth overall, but one of the girls wasn’t able to make it so that’s how I got the spot” said McLean on how she ended up in Edmonton.

When McLean arrived in Edmonton she was paired with professional Jessica Korda. Korda, a 10 year old American professional from Florida, has become infamously known as the golfer who fired her caddie mid-way through a round at the US Women’s Open earlier this summer. Fortunately for McLean she was up to snuff not only in caddying for Korda, but also helped her by putting on the 11th green. McLean was then invited to walk with Jessica Shepley and once again with Korda this time on the 18th hole. The next day, Mclean and her father Angus took in first round action at Royal Mayfair before flying home because of Meghan’s golf commitments.

McLean’s was due to represent Nova Scotia during the Atlantic Junior Match Play Championship at Amherst Golf Club. McLean is one of three girls representing the province with the other two being familiar faces in Sister Heather, and fellow Ken-Wo member Darcy Fuller.

When asked what her thoughts were on her summer golf season thus far McLean said she didn’t expect to see success to happen so soon.

“I honestly didn’t expect all of this so soon, I was hoping I could do everything I have this summer when I was 16 or 17, so to do it at 14 is pretty awesome,” she explained.

McLean said her future plans for golf include improving her consistency, while continuing to pursue future goals including competing at the 2017 Canada Games.

This summer wouldn’t have been possible without the support of her family, both at home and at the golf club.

“I have been so fortunate to have my family support me they have been great, and also everyone at Ken-Wo have been very supportive so I am very thankful for that”. With the experiences she has had already enjoyed as a 14 year old, watch for the Port Williams native to develop into one of the province’s top female golfers in the coming years.

Kody Blois is a former goaltender with the Amherst Ramblers, now attending Saint Mary’s University. Blois is the Tournament and Communications Coordinator for the Nova Scotia Golf Association. You can follow him on twitter @kodyblois or check out his blog here.