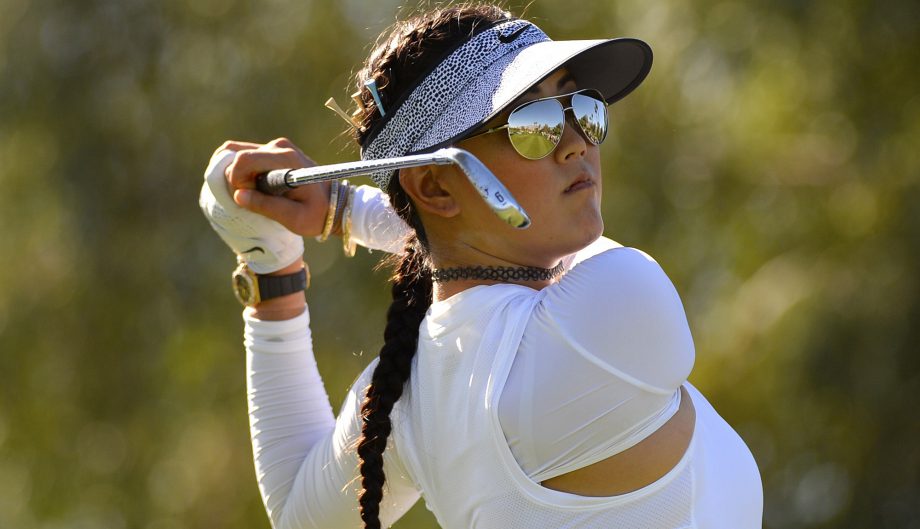 RANCHO MIRAGE, Calif. – Michelle Wie was the teenage prodigy on this same desert course 14 years ago, showing off her precocious skills and a seemingly limitless future.

Now a wizened veteran of the LPGA Tour, the 27-year-old Wie saw reflections of her own journey Thursday while she played alongside 14-year-old Lucy Li, the newest wunderkind with a chance to dazzle the golf world at the ANA Inspiration.

“For sure, very mature for her age,” Wie said. “The way she played out there, her game did not seem 14. I was really impressed with her game and how she handles herself out there. She’s very calm and collected.”

Wie’s young playing partner still has things to learn from the pro, however. While Li opened with a 71, Wie shot a 4-under 68 to move one stroke behind leader Karine Icher of France before 35-mph winds shortened the opening day of competition at the first major of the year.

Four players were one shot behind Icher, including 17-year-old amateur Eun Jeong Seong, who had an early hole-in-one .

Half of the field in the LPGA Tour’s first major of the year was still on the course when play was stopped. The first round will resume Friday morning when the Coachella Valley calms down.

Brooke Henderson of Smiths Falls, Ont., shot a 1-over 73 while Maude-Aimee Leblanc of Sherbrooke, Que., had a 7-over 79. Hamilton’s Alena Sharp was 3 over through 12 holes.

But an early tee time allowed Wie and Li to log their first round together. Li has known about Wie for her whole life, since she grew up in the San Francisco suburbs while Wie was attending Stanford and playing on the tour.

“I was really excited to play with her,” Li said. “She’s super nice, and we just had a lot of fun today. She played really well.”

Wie was only 13 when she debuted at this tournament, then called the Kraft Nabisco Championship, in 2003 as one of the most touted teenagers in golf history. She became the youngest player ever to make an LPGA cut on the Dinah Shore Course, finishing tied for ninth in her first major.

Li was almost six months old at the time.

While Wie has never dominated the tour as some anticipated, she won the U.S. Women’s Open at Pinehurst in 2014. That’s also where Wie met Li, then an 11-year-old who had just become the youngest person to qualify for the Open.

After missing the cut at Pinehurst, Li stayed for the weekend to watch Wie’s victory. Li then cracked the field of her second major last week by winning the ANA Junior Inspiration.

Wie hasn’t won an LPGA tournament since that U.S. Women’s Open breakthrough, and she missed the cut in three majors last year. Playing alongside the precocious teen caused Wie to reflect on her own beginnings in surprising ways.

Li is almost a foot shorter than Wie, and she’s already a junior in high school. She’s working on her Algebra II homework this weekend when she isn’t playing, and she recently indulged her interests in politics and history by reading Doris Kearns Goodwin’s “Team of Rivals,” a 944-page examination of Abraham Lincoln and his cabinet.

“I’m probably a little more experienced than the last time (in a major), but it’s still very exciting,” Li said.

Lydia Ko, the defending ANA Inspiration champion and world No. 1, was 2 under through five holes in vicious wind before play was suspended.

Playing in her second major, the 17-year-old Seong aced the par-3 fifth, celebrating in disbelief after she put a 6-iron into the cup for this tournament’s first hole-in-one in five years. Although she plays sparingly on this side of the Pacific, Seong won the U.S. Women’s Amateur and the U.S. Girls’ Junior tournaments last year.

“I couldn’t see the hole, and then I just said, ‘Oh my God!”’ Seong said after the second hole-in-one of her career. “I don’t think about being one of the leaders. I’m just happy that I’m playing.”

Icher had seven birdies in an outstanding opening round.