Officiating the PGA Championship of Canada 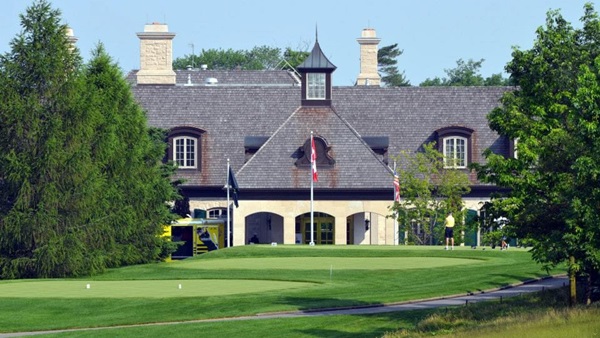 Golf Canada is proud to be a partner of the PGA of Canada. And, with such partnership, opportunities arise to assist each other in the execution of our championships. Last week, my colleagues and I were fortunate enough to officiate the PGA Championship of Canada at Magna Golf Club in Aurora, Ont. It was exciting to see spectacular play from the top 64 club professionals from across the country.

The championship was a match play event which differs in the Rules from stroke play championships. In any form of play, a referee is one who is appointed by the Committee to decide questions of fact and apply the Rules. He or she must act on any breach of a Rule that he observes or is reported to him.

In match play, there is an exception: unless a referee is assigned to accompany the players throughout the entire match, he has no authority to intervene in a match other than in relation to Rule 1-3 (Agreement to Waive Rules), 6-7 (Undue Delay), and 33-7 (Disqualification Penalties; Committee Discretion). The first two days we were faced with this type of officiating and only able to intervene under the 3 scenarios.

Beyond these three Rules, if we saw a Rules breach, we were unable to interject in a match. Note 1 under Rule 2-5 states a player may disregard a breach of the Rules by his opponent provided there is no agreement by the sides to waive a Rule (Rule 1-3). It is solely up to the player whether he wants to overlook a Rules breach of his opponent.

My colleague Adam Helmer, was called into an interesting scenario during the first round. A player had hit the cart path on his approach shot and it bounced down the road into a manhole. A spectator witnessed the ball enter the manhole which allowed the player to find and identify the ball. The player was able to take relief under Rule 24-2b, relief from interference by an immovable obstruction through the green. Note 2 to Rule 24-2 states if a ball to be dropped or placed under this Rule is not immediately recoverable, another ball may be substituted which was the case with this ruling.

Here’s another interesting situation that arose at Magna. Prior to the Round of 16, a competitor approached an official inquiring about a ruling. The competitor presented the situation; if he was chipping onto the green, and his opponent’s ball was a few feet from the pin, could he request his opponent to leave his ball beside the hole. In a stroke play competition, this would be a disqualification under Rule 22-1, but this situation differed due to the form of play. The Rules do not require the opponent to leave the ball beside the hole to assist his opponent, and the opponent was not in breach of the Rules by asking his player to leave the ball there. In Decision 22/5 there is a similar situation where an assisting ball is requested to be replaced after the opponent had marked his ball.

There were four Golf Canada championship staff members helping out with the PGA Championship which allowed each of us to be assigned to a match in the quarterfinals, entitling us to apply the Rules in each match. Each official walked with the groups for the remainder of the championship encountering clarification questions and routine rulings. It was a great experience assisting the players and the PGA of Canada throughout the week.

If you would like to expand your Rules base, you can begin your Rules of Golf Education anytime, beginning with our online curriculum. To start your Rules Education, click here.

As always, our ‘Ask an Expert’ tool can be utilized and accessed online here. We would be happy to answer your Rules-related inquiries.