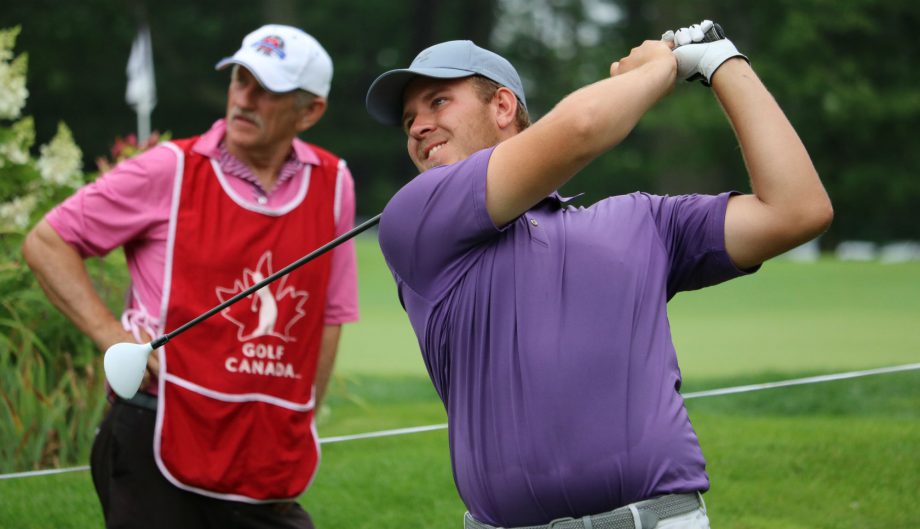 Sean O’Hara, Maxwell Ferrari, Riley Goss and nine others earned exemptions into the 2017 Canadian Men’s Amateur Championship weather-delayed qualifying event at The Toronto Golf Club on Saturday.
O’Hara shot the low round of the event with a 3-under-par 67 after he went bogey-free on the back nine with three birdies, largely due to a red-hot putter.

“I putted really well today,” he said, next to the 18th green. “I had 13 putts on the back nine which really came as a relief because I’ve putted poorly all year.”

Most impressively, the 20-year-old from Mississauga, Ont., booked his ticket into 113th playing of the event just two months removed from a six-month recovery period for a broken shin.

“I was injured from December to June,” he said. “I didn’t even touch a golf club. I started making little half swings two months ago but I was just really weak because I hadn’t move my leg in six months. I still don’t have my power back, I’m still down about 10 mph in clubhead speed, but I can’t complain much shooting 67.”

Maxwell Ferrari, from Farmingham, Mass., and Riley Goss from Toronto, Ont., shot matching 2-under-par 68s, both limiting themselves to just one bogey.

Ferrari, who started on the back nine, got off to a rough start after he put his opening tee shot into the trees on the right side of the 10th hole but managed to head to No. 11 unscathed.

“After my ball was in the trees, I hit a really nice wedge shot to within four feet and made that for par,” Ferrari said. “That kind of settled me down and put the round in the right direction.
From there I just stuck to my process and tried to stay calm the whole round and take it shot-by-shot.”

Goss got off to a hot start with birdies on holes four, seven and eight on Friday, but he, like most of the afternoon draw, was forced to put his round on hold due to dangerous weather conditions. Knowing that he was in a good spot at the resumption of play on Saturday, the 22-year-old played steady golf and finished up with one bogey and nine pars.

“After the rain delay went off I knew that I needed to par-in today and I’ll be fine,” he said. “I was playing well and I lost my momentum after the delay, but I played well enough to finish so I’m happy about that.”

The Canadian Men’s Amateur Championship takes place from Aug. 7-10 at The Toronto Golf Club and Islington Golf Club in Toronto, Ont., with a field of 264 players competing from nine different countries.

The field will be reduced to the low 70 and ties for the final two rounds contested at The Toronto Golf Club.