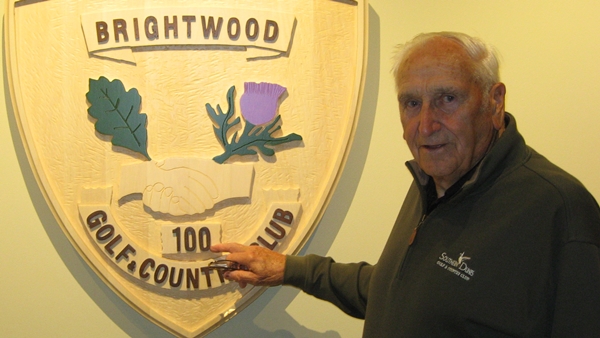 As Brightwood Golf and Country Club celebrates 100 years in the business, one long-time member is set to celebrate his own impressive milestone at the historic Dartmouth club.

Eighty-six year young, Don O’Hearn has now been a member at Brightwood Golf and Country Club for the past 70 years. And those 16 years of his life when he wasn’t a member Don was never far away from the course he grew up on.

Don O’Hearn was born February 20, 1928 in Dartmouth, N.S., just a mere stones throw away from the 2nd green at Brightwood Golf and Country Club. When Don was born, Brightwood had been established for 14 years, and his father Martin had been the first ever caddy at the course.

The O’Hearn family has always enjoyed a strong golfing tradition. Don’s brother Lawrence “Butch” O’Hearn became is the first and only Nova Scotian ever to earn a PGA Tour Card. Brother Clarence “Gabby” was a strong amateur player who went on to win various NSGA titles. Another brother, Bernard, was set to become a club professional at Chester Golf Club before he sadly passed away at age 29. He was regarded as arguably the best golfer amongst the brothers. Don’s aunt Margaret was a talented golfer who  served as head caddy master at Brightwood for many years. In total, eight of the eleven O’Hearn children played golf, with many of the brothers and sisters excelling at the sport.

At age 9 Don began to work as a caddy at Brightwood, starting a relationship that has now spanned eight decades. During the 1930’s a caddy’s salary was actually quite lucrative.

O’Hearn would caddy until he was 16. He learned the game from being on the course everyday.

“ We used to have a club in our hands all the time,” he explained. “As a caddy we would constantly be swinging the club. We had a great time as caddies, and after we’d finish for the day we would sneak out onto the course to play the holes away from the clubhouse, it wasn’t as busy back then you see.”

After his caddying career came to a close, O’Hearn became a member of Brightwood. However because of an incident involving bananas he almost lost his golfing privileges altogether.

“Who told you about that!” asked O’Hearn when questioned about the event, clearly surprised his tricks had been documented by NSGA Historian Allan Dunlop.

Early in his first year O’Hearn had almost been expelled from the course because of a broken window frame on the old clubhouse window.

“I came up to the course and there were a few buddies of mine who were standing near the clubhouse basement, I guess some of the guys were kind of hungry so they were trying to push the window far enough aside to grab a bowl of bananas near the window,” he said.

The friends were successful, but the frame cracked during the incident. O’Hearn was spotted in the process and as the only culprit recognized. He then faced a suspension from the club.

All was soon forgotten and O’Hearn luckily only had to repay for the stolen bananas.

O’Hearn continued to play golf competitively, but found it increasingly difficult to balance his work career as a steam fitter and still have time to play events. Eventually O’Hearn began working with the Nova Scotia Government plying his trade with the Department of Public Works, again his job prevented him from playing much competitive golf.

O’Hearn played his first Nova Scotia Amateur in in 1957, where he cracked the top-20. In 1963, he went on to shoot 72-71-64-74 en route to a 1 stroke victory over his brother Lawrence. His third round 64 tied a course record and set a competitive course record at the time.

Don would be the only brother to win the championship. He also captured two senior championships – 1983 and 1991. In 1989, while partnering with his brother Clarence “Gabby”, the O’Hearns became the first team of brothers to win the Senior Men’s Four Ball Championship.

“We usually play on Tuesday, Thursday, and Sunday,” explained O’Hearn, who still maintains a sharp handicap of 10. “We have a great time, we really do, and we still always play for something, at least $5.”

With this year’s championship being played at his home course, O’Hearn decided he would like to play the Amateur during Brightwood’s 100th anniversary.

“The only reason I am playing is because it’s the 100th anniversary,” he added. “I thought it would be special to get out and play.”

Kody Blois is a graduate of Saint Mary’s University, President of the East Hants Sport Heritage Society and is the Tournament and Communications Coordinator for the Nova Scotia Golf Association. You can follow him on twitter @kodyblois or follow his blog kodyblois.blogspot.ca.