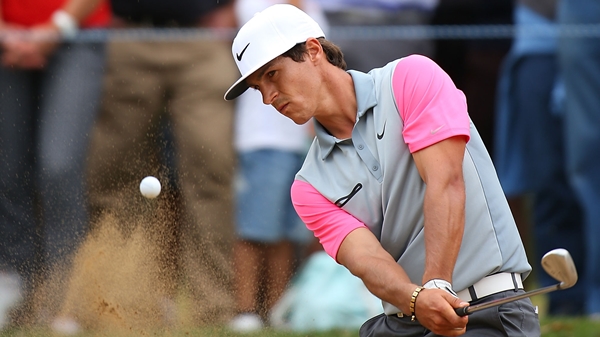 PERTH, Australia – Thorbjorn Olesen’s bunker shots and putting helped him grind out a 5-under 67 Saturday to lead the Perth International golf tournament by three strokes after the third round.

Olesen of Norway had six birdies and a bogey to reach 16-under after three rounds, matching the score that won the inaugural tournament two years ago. He leads from South Korea’s Sihwan Kim, who shot 69 to move to 13 under, a stroke ahead of England’s James Morrison, who also had 69 after Friday’s course-record 63.

American Peter Uihlein was the big mover Saturday, making seven birdies in an unblemished 65 to move up to outright fourth at 11-under.

Perth’s Lake Karrinyup Golf and Country Club played relatively sedately Saturday in warm and mildly windy conditions. There were 21 over-par scores among the 65 players who made the cut and 11 eagles as pin positions remained forgiving.

Olesen demonstrated an outstanding ability to scramble as he saved pars or made birdies from difficult positions. He set that tone with a birdie on the first and reinforced it when he chipped in for birdie at the third after taking a provisional ball.

“It was a grind out there,” Olesen said. “I was struggling but I kept on fighting, kept having fun out there and trying my best.

“Five under is a pretty good score when you’re not playing that great. I hit some awesome bunker shots today. I missed one on 15 which was almost impossible but I had some great up and downs, almost holed a couple.”

Olesen said his save on the third hole reflected his round.

“I hit my tee shot right – I hit a couple right today – but it was lying beautiful in the light rough,” he said. “I hit it perfect, it checked up on me and rolled right in.”

Kim contributed one of the day’s eagles, on the par-4 14th, and had four birdies and three bogeys in another scrambling round.

Morrison couldn’t replicate the fireworks of his 9-under second round, but made five birdies in six holes on his inward nine to stay well in contention.

Jason Dufner, the 2013 U.S. PGA champion, who made the cut in his first tournament after almost three months off with a neck injury, shot 69 Saturday to be in a tie for 19th at 7-under.