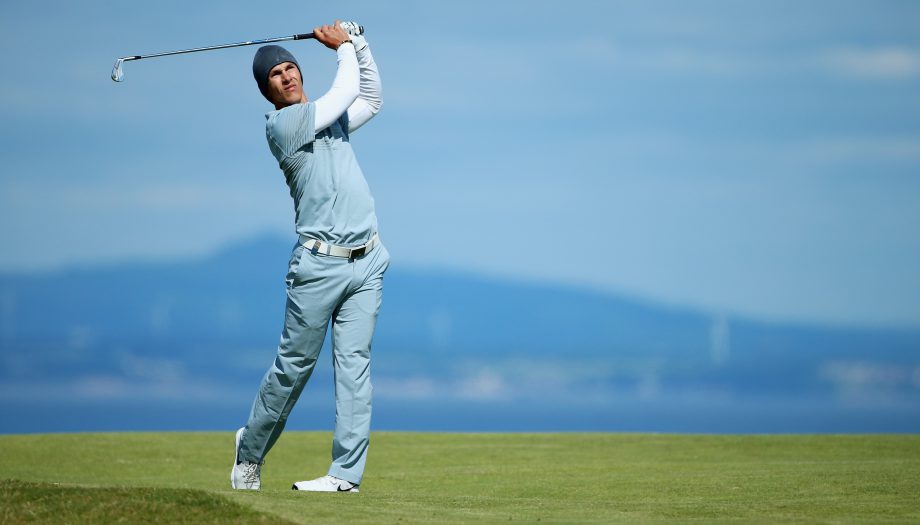 GULLANE, Scotland – Thorbjorn Olesen returned to form with a 7-under 63 to take a one-shot lead after the first round of the Scottish Open on Thursday, with Jimmy Walker leading a trio of top Americans in the chasing pack.

Rebounding from missing the cut in five of his last six events, Olesen made seven birdies – including three in a row on Nos. 15-17 – and was bogey-free in benign conditions for the morning starters over the Gullane links.

In a week in which Rory McIlroy withdrew from next week’s British Open because of an ankle injury sustained playing soccer, it’s fitting that Olesen is playing a starring role here.

The 25-year-old Dane sustained one of the most bizarre injuries of recent years when he fell off a camel while on holiday with friends in Dubai last year, pulled a groin muscle and was ruled out for two months. A hand injury forced him out of action this season from February to May, contributing to his poor recent form.

Daniel Brooks of England, playing in the last group, birdied the final hole to take sole ownership of second place on 6-under ahead of a group of seven players a stroke further back.

The 12th-ranked Walker also avoided any trouble early in the first round, with only a light breeze coming off the Firth of Forth in the morning. Two birdies in his last three holes sealed a 5-under 65 for Walker and a share of third place with Matthew Nixon, Richard Finch and Seve Benson of England, Alejandro Canizares and Adrian Otaegui of Spain, and Sweden’s Johan Carlsson.

Americans Rickie Fowler and Matt Kuchar were in a large group on 4-under 66, along with two former champions – Graeme McDowell and last year’s winner Justin Rose.

Rose picked up where he left off from Royal Aberdeen 12 months ago in what he called a “pretty stress-free round”, while McDowell produced one of his best displays of a miserable 2015 that has seen him register just one top-10 finish either side of the Atlantic.

The 2010 U.S. Open champion, who has plunged to No. 52 in the rankings, raced to 5-under after four straight birdies on Nos. 5-8 but ruined his round by three-putting the last two holes for bogeys. McDowell is looking to revive his game by watching videos of his 2010 swing.

“It’s about trying to turn this train round back the right way,” McDowell said. “It’s been a tough grind this year.”

Olesen was regarded as one of Europe’s next big things around 2011-12 but hasn’t really kicked on, with his two titles coming at the Sicilian Open in 2012 and the Perth International in 2014.

Down at No. 122 in the rankings, Olesen has previous form on the links – he was runner-up at the Dunhill Links Championship in 2012, after finishing tied for ninth at the British Open at Royal Lytham.

“I grew up in Denmark and am used to playing in a lot of wind, so I think that helps me,” Olesen said.

Olesen found 11 of 14 fairways, which he said was the key to his round and allowed him to attack a course that wasn’t protected by wind. A 40-foot putt on No. 12 took him to 4 under before his three successive birdies pushed him clear on his own.

Three qualifying places for next week’s British Open are up for grabs for top-10 finishes, and Olesen is among the players still to book his place at St. Andrews.

Phil Mickelson, the 2013 winner at the Scottish Open, struggled with his putting in shooting a 1-under 69.

“I haven’t played the last couple of weeks and I was a little rusty,” Mickelson said.