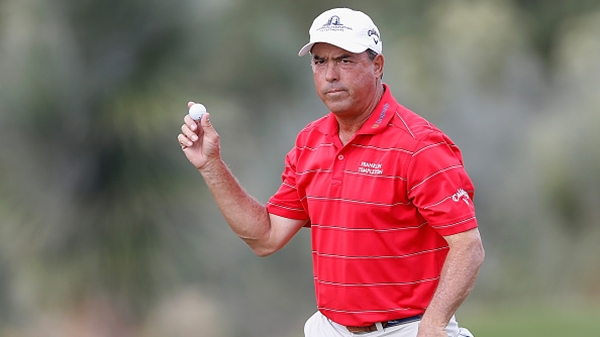 Langer matched the 64 to finish the second round only one shot behind Browne in the Champions Tour event.

Langer made a 30-foot eagle putt on No. 18 for his 64 – just as Browne predicted as he watched from the side.

“He is a public peril,” Browne said, referring to Langer’s sometimes dominant play.

Langer is especially strong at TPC Sugarloaf. He won the tournament in 2013 and finished second last year, making shots like his eagle putt.

“That’s what you expect out of him,” Browne said. “It’s no accident. He didn’t win two Masters by accident. … He’s our marquee guy out here and he shows up every single week and there’s one thing that he cares about doing and that’s winning the tournament.”

The 55-year-old Browne was at 12 under. Browne’s big advantage could be the weather. Sunday’s final round is threatened by a forecast for rain and possible thunderstorms. Rain already pushed back the completion of Friday’s first round to early Saturday.

“You would rather be one in front than one behind sitting on a chair hoping to get to play,” Browne said.

Browne’s white shoes were streaked with red mud by the end of his day at soggy TPC Sugarloaf.

Mediate led before an errant tee shot on the par-3 No. 11 led to a double bogey. While preparing for the tee shot, Mediate made a late change to a 4 iron and then mishit his shot into a lake, not even close to the green.

“I probably quit on it a little bit obviously thinking it might be too much,” Mediate said of his club selection.

Mediate said his strategy throughout the day was affected by the possibility there may be no final round.

“Oh yeah, I was thinking that all day,” Mediate said. “I think all of us were. Getting off to that start I was right where I wanted to be.”

Browne took the lead with Mediate’s double bogey. Minutes later, Browne stretched the lead to two strokes with a birdie on No. 13.

First-round leader Tommy Armour III was 6 under after a 71.

Browne’s only win on the tour was the 2011 U.S. Senior Open. He already has three top-10 finishes this year and closed Saturday’s round with birdies on 17 and 18.

“It’s a good start for my year regardless of what happens (Sunday), so I’m looking forward to the rest of the season for sure,” he said.

Another Canadian sat withing the top-10, as Rod Spittle had a share of 8th at 6-under.

Mark Calcavecchia withdrew due to an illness following his first-round 77.