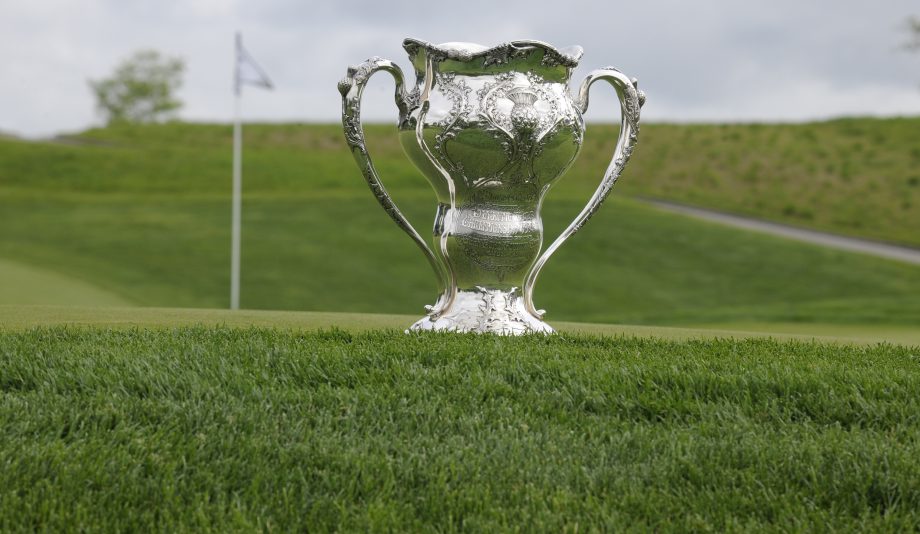 The Olympic trophy is in the midst of a historic and timely renaissance. Golf’s return to the Games this summer has ramped up interest in the beautiful sterling silver chalice to an unprecedented, never-before-seen level. For decades it remained cloaked in relative obscurity. No more.

Golf Channel showcased the trophy earlier this year in a segment on Morning Drive. It has made public appearances in support of Olympic golf, including at this year’s PGA Merchandise Show in Orlando, Fla., and last year’s WGC-Bridgestone Invitational and RBC Canadian Open. Highlighting a busy upcoming schedule it will tentatively be on display during the Open Championship at Royal Troon, be flown back from Scotland for the RBC Canadian Open the following week, then tentatively be in Rio de Janeiro August 5-21 for the men’s and women’s Olympic golf competitions.

Awarded to Toronto’s George S. Lyon in 1904, the Olympic trophy has never shined quite as brilliantly as it has of late. On permanent display at the Canadian Golf Hall of Fame & Museum on the grounds of Glen Abbey in Oakville, Ont., this uptick in attention has put it into the conversation among the game’s grandest trophies.

“During many Canadian Opens that I played at Glen Abbey, I had a chance to see the Olympic individual trophy George Lyon won several times,” said two-time Masters champion and noted golf historian, Ben Crenshaw. “Mr. Lyon was one of the great amateur golfers in Canadian history. I’ve also read he was a very fine player, with his crowning achievement being his Olympic win in that playoff with Chandler Egan in St. Louis in 1904. It’s a shame he didn’t get the chance to defend the trophy with golf cancelled out of the Olympics in 1908.”

Lyon’s fellow countrymen will take up that quest on his behalf. More than a century later Canada’s Olympic golf team heads to Brazil as the defending gold medallists. The trophy is a symbolic reminder of that victory, a feat that ranks right alongside Mike Weir’s victory at the 2003 Masters as one of this country’s greatest golfing achievements.

“There’s kind of an aura about the trophy,” says PGA Tour winner Nick Taylor, one of the players vying for a spot on the Olympic men’s team. “When you’re around it you feel it. It’s pretty special.”

Lorne Rubenstein can relate to Taylor’s viewpoint. The renowned national writer’s first job in golf was as curator of the Canadian Golf Hall of Fame, Museum & Library during its time in a spacious room on the ground floor of the old Jesuit retreat at Glen Abbey. Now a Hall of Fame member himself, Rubenstein fondly recalls the hours he spent in such close proximity to the iconic piece of golf history.

“The Olympic trophy took pride of place on a stand all its own, in a central part of the museum,” recalls Rubenstein. “I was in the museum every day, and, every day, I would make my way over to this ornate, grand trophy that seemed to stand sentinel over the room, bathed in light pouring in through the leaded windows. It seemed almost mystical to me. The trophy belonged to Canada, to all golfers. I often wondered if we would again see golf in the Olympics, and if golfers from around the world might even again compete for this iconic trophy — so special among all the trophies in the game.”

Made of 26-point sterling silver, the trophy — along with all trophies and medals awarded for golf at the 1904 Games in St. Louis — was commissioned by host course Glen Echo Country Club. Local business J. Bolland Jeweller Co. designed and manufactured the trophy, which features the stately Glen Echo clubhouse on one side.

Fred Lyon, George S. Lyon’s son, donated the trophy along with the clubs his father used in the Olympic Games during his time as a Royal Canadian Golf Association (now Golf Canada) governor back in the late 1950s.

“The RCGA had started to collect memorabilia and artefacts for a potential museum and library in the 1950s,” explains Meggan Gardner, current Canadian Golf Hall of Fame curator. “It was a generous donation of a treasured Lyon family heirloom. It’s certainly our crown jewel.”

And as Rubenstein points out, Canadian golf’s crown jewel is about to go global.

“There was nothing like it. There still is nothing like it,” he says. “In my mind’s eye I still see the trophy in the museum, drawing me in, drawing in all visitors just as it will draw the world’s attention this summer for the Olympics in Rio de Janeiro.”