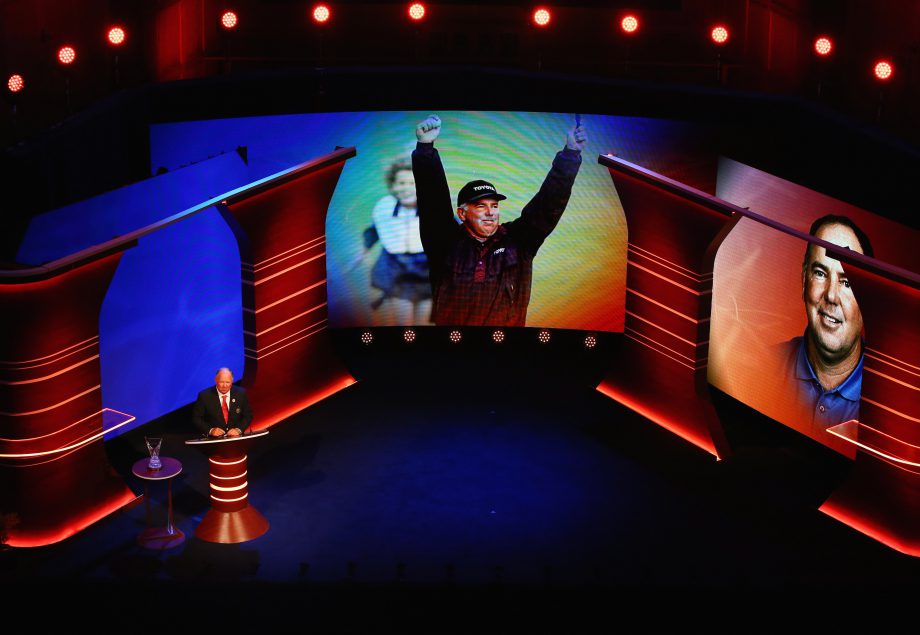 ST. ANDREWS, Scotland – Laura Davies was inducted into the World Golf Hall of Fame on Monday, even though she wasn’t around to enjoy all of it.

A four-hour flight delay out of Philadelphia forced her to miss the induction.

In a rush to the University of St. Andrews, she at least watched the ceremony on Sky Sports in the car, but when her pre-recorded video came on, the signal went out and she missed her speech and that of Mark O’Meara. She finally made it to the reception, a surprise to hundreds of guests who thought she had abandoned efforts to get there.

“Everything that seems to happen to me is weird,” Davies said at the reception.

Not her place in the Hall of Fame. That was earned with four major titles, more than 70 wins around the world and becoming such a dominant force in women’s golf that she starred on the LPGA Tour and still took time to crisscross the Atlanta Ocean to support the Ladies European Tour.

Davies was inducted along with major champions Mark O’Meara and David Graham of Australia and architect A.W. Tillinghast, who studied under Old Tom Morris and created golf courses that hosted majors.

It was the first time the World Golf Hall of Fame took its ceremony outside the United States, and it created a scheduling problem for Davies.

The 51-year-old from England made the cut in the U.S. Women’s Open and tied for 47th on Sunday. And that’s when the fun began.

The heat in Philadelphia led to mechanical problems and a four-hour delay from the scheduled 10 p.m. departure. When it finally took off and reached Heathrow in London, the airport was so busy that her plane had to circle for about a half-hour.

And when she finally got to Edinburgh, her luggage didn’t make it. Davies had another bag that allowed her to wear something she considered presentable.

“I was quite upset,” Davies said. “At the end, it was getting quite distressing.”

She had a large group of family and friends at the induction, including the caddies of Justin Rose (Mark Fulcher) and Ian Poulter (Terry Mundy) who once caddied for Davies on the LPGA Tour.

During this saga, some of her peers on the LPGA Tour took to Twitter to express their outrage. Karrie Webb tweeted that her induction was a career highlight and the special occasion was taken from Davies through “terrible scheduling.”

Beth Daniel said she was “sad and sickened” that Davies couldn’t make the induction.

“Delayed flights from US. Lack of foresight by all,” she tweeted.

“As soon as her last putt dropped Sunday, the World Golf Hall of Fame and others onsite made every effort to get Laura to St. Andrews,” the Hall of Fame said in a statement. “Unfortunately, mechanical issues with her plane and other international travel logistics made it impossible for her to arrive on time.”

Previous induction ceremonies were held at the World Golf Village in St. Augustine, Florida. The ceremony in Florida first was held in May 1998 and in recent years was moved to the fall.

Davies arrived at the Old Course Hotel about 7 p.m., changed clothes and headed to the reception. She was announced as she walked in the door.

“I was terrified,” Davies said. “I look in the room and see Arnold Palmer and Bernhard Langer and all these great faces. It was a bit intimidating.”

The Hall of Fame selection process was overhauled to eliminate the independent voice of the writers and turn the voting over to a nominating panel and a 16-member board to vote on finalists. Both bodies consisted of a majority of golf administrators.

O’Meara won 16 times on the PGA Tour, including the Masters and British Open in 1998 when he became at age 41 the oldest player to win two majors in one year. He also won the U.S. Amateur and titles around the world.

Graham won three majors – twice at the PGA Championship and the 1981 U.S. Open at Merion when he putted for birdie on every hole in the final round.

The next induction ceremonies will be in 2017 at the World Golf Village, and then in 2019 during the U.S. Open at Pebble Beach.