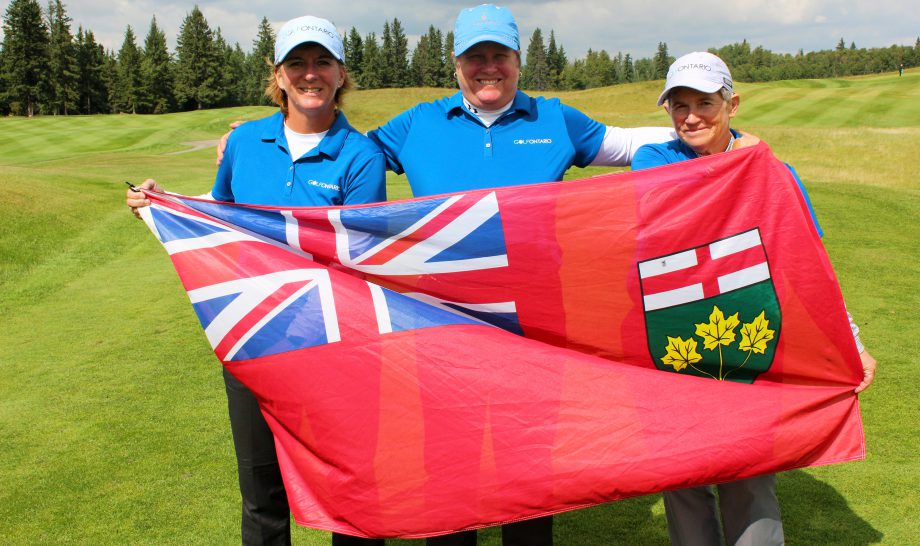 “We’re very proud of representing Ontario and Golf Ontario,” said the 52-year-old. “It’s always such a fun competition. It’s always great to have some bragging rights amongst the provinces.”

The team of Kyrinis (Thornhill), Canadian Golf Hall of Fame member Mary Ann Hayward (St. Thomas) and Ivy Steinberg (Stouffville) finished with a combined total of 12-over 300. They are the same trio which began Ontario’s string of consecutive victories in 2014, while only Hayward represented her home province on all three occasions.

“It’s great,” said Kyrinis, when asked to reflect on the team. “We’re very supportive of each other. Mary Ann and I, we battle it out back home in Ontario all the time, but we’re good friends. Competition is just a part of what we do. Ivy – we’ve done a lot together this year. We share the same swing coach, so we practice a lot together. It’s been great having them both as teammates.”

Team Ontario claimed a three-stroke victory over the squad representing the province of Quebec. The contingent from British Columbia claimed third at 18-over 306.

At 2-over 146, Kyrinis leads the 40-and-over Mid-Master and 50-and-over Senior divisions and is tied atop the 25-and-over Mid-Amateur leaderboard alongside Margo Dickinson of Hartland, N.B. Kyrinis has seen success at this competition, having finished third in the Senior Championship in 2014 and runner-up across the three divisions in 2015.

“You certainly hope to draw on it,” she said of her past experience in this competition and in her career. “Just the feeling like you can get the job done and just believe in yourself.”

Kyrinis stressed the need for focus and composure when looking ahead to the final day of the national championship.

“It’s one shot at a time,” she noted. “I really do say that a lot in my head as I go out there. And I just try to stay patient. I think I did that well yesterday and today. I had a little rough patch today in the middle of the round. I just stayed patient and a couple of birdies came my way.”

First-round leader Hélène Chartrand from Pincourt, Que., is 3-over and sits third in the Mid-Amateur competition and second in the Mid-Master and Senior divisions. The 2014 Senior winner is four-strokes clear of defending champion Terrill Samuel of Etobicoke, Ont., who claimed the three division titles last year.

A total of 83 players finished 178-or-better to advance to the third and final round of the 2016 Canadian Women’s Mid-Amateur and Senior Championship. The number of players advancing to the final round includes 12 players who are not eligible for the Senior division, but registered scores equal to the final qualifier in the 50-and-over category. The finale of the national championship will commence at 8 a.m.

Additional information from the competition can be found here.