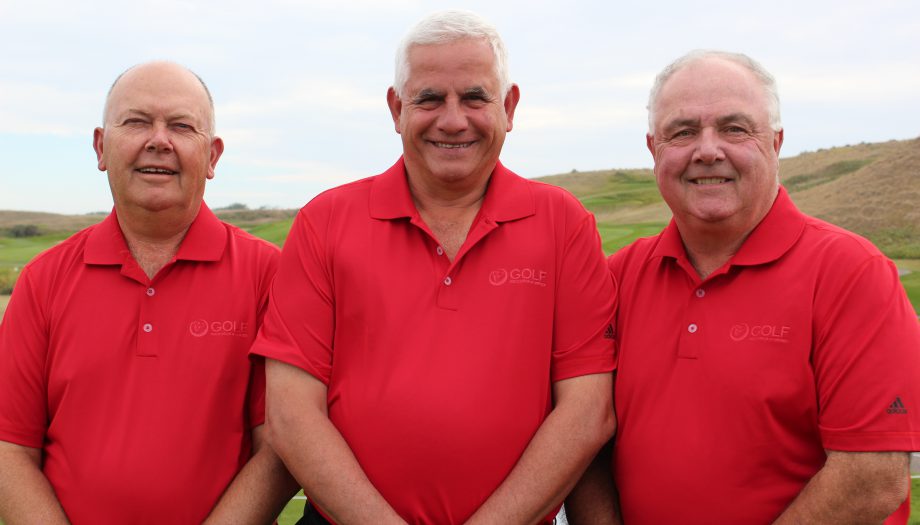 The Ontario trio of Michael Jackson (Collingwood, Ont.), Michael Mealia (Richmond Hill, Ont.), and Lars Melander (Oakville, Ont.) posted a combined second-round of 4-under 140 to capture the Phil Farley trophy with a 3-under 285 total.

“We were behind by a couple of shots going into today and we knew a couple of good scores had to be done,” said Team Captain Michael Jackson. The three-man unit began the day down two strokes and benefited from a second-round 69 by Melander and 71 from Jackson.

The victory adds to Team Ontario’s successful summer which has already included team and individual titles at the Canadian Men’s Mid-Amateur Championship. “I’m really pleased to be a part of that and represent the Golf Association of Ontario,” added Jackson.

The squad finished one stroke ahead of Team Alberta made up of Floyd Kilgore (Grimshaw, Alta.), Howard Broun (Calgary) and David Schultz (Calgary) who finished 1-under par on the day. Rounding out the top-three with a total of 287 was John Gallacher (Burnaby, B.C.), Doug Roxburgh (Vancouver) and Sandy Harper (Nanaimo, B.C.) of Team British Columbia.

In the 70-and-over Super Senior division, George Stokes of New Hamburg, Ont., claimed a one-shot victory over Ken Bradley of Moose Jaw, Sask. Stokes improved upon a runner-up result in 2014 by carding rounds of 78 and 82 in tough windy conditions to finish 16-over 160 for the victory.

“It’s nice. It’s sort of the daily double because in 1998, I won the Canadian Men’s Senior Championship. So now that I’ve had a chance and finally won the Super Senior, it’s sort of a feather in my cap. I’m happy about it,” said the 73-year-old Stokes.

Bradley shot a 79 in his second round to finish 17-over par. Finishing in third was 2014 Super Senior champion Mickey Batten of Chateauguay, Que., with a total of 162.

Following tough windy conditions which forced the tournament to be reduced by 18 holes, the second round of the Canadian Men’s Senior Championship was completed on Thursday with Jack Hall of Savannah, Ga., taking the lead at 8-under par.

“I have the speed of the greens down pretty well and most every putt I hit got to the hole. When you have the ball getting to the hole, some of them drop,” explained the 2015 Georgia Mid-Amateur champion. After a first-round 69, Hall carded a bogey-free 5-under 67 to lead by one stroke.

“If I can come out and get loose early, hit a couple fairways and greens and play my game, I should be fine,” said the second-round leader.

Pat Thompson entered the second round in the lead and followed his 7-under course record with an even-par round. The Asheville, N.C. native matched two birdies with two bogeys and sits tied for second. Joining Thompson at 7-under 137 is Ronald Kilby of McAllen, Texas who carded scores of 68 and 69 despite both his rounds being suspended due to the harsh winds.

“I have to say that obviously our group got the short end of the draw, and that happens – that’s just golf. You win some of those and you lose some of those. Having got through the hard part playing well and scoring well, I feel like I’ve given myself a chance to win the tournament,” said the 60-year-old Kilby.

Lars Melander from Oakville, Ont., and Brady Exber of Las Vegas, Nev., are tied for fourth at 5-under par.

The winner of this year’s championship will earn an exemption into the 2015 U.S. Senior Amateur at Hidden Creek Golf Club in Egg Harbor Township, N.J., from September 26 to October 1.

For additional information, including tee times and scoring can be found here.