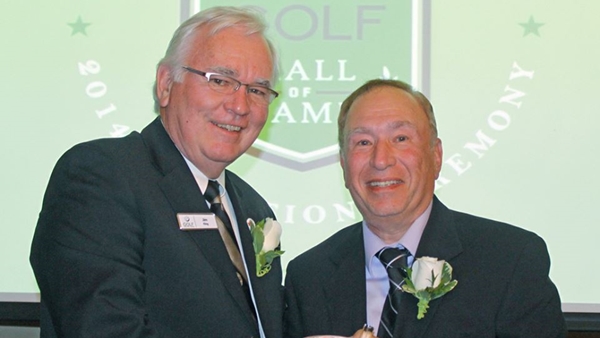 GAO president Jim King summed up the importance of the evening for golf in the province.

“Tonight is about honouring our past. I think it is very important that we recognize the accomplishments, contributions and the inspiration that these people have provided for the other side of the equation: the up and coming. So it is really nice to honour them.”

The ceremony began with the presentation of the Lorne Rubenstein Media Award to Ken McKee. McKee was unable to attend the ceremony, however, his grandson Maxwell delivered his acceptance speech that was written by McKee and members of his family.

“Mostly we just wanted this speech to convey sentiments and how much he enjoyed covering the game,” read Maxwell. “From high school to the Masters, he just loved getting there to tell the story in his own way. My grandfather is truly humbled and thankful to have been chosen as the 2014 Lorne Rubenstein Award recipient, my grandfather has the utmost respect for his work.”

Maxwell closed with a word of thanks directly from McKee.

“I want to thank the Golf Association of Ontario for this award and to all the players, past and present, I could not have done my job without you.”

The first inductee to be recognized was Dorothy Campbell Hurd Howe. In acceptance of the award for Hurd Howe, the Ladies President of the Hamilton Golf and Country Club, Nancy Rundle, where Hurd Howe was a member while she lived in Canada, sent a letter of thanks for the recognition of one of their own. It was delivered by emcee Rod Black.

Next, Earl Fritz took to the stage to receive his award.

“I never understood how excited one could be until I was called by Dave Mills (retired GAO Executive Director) and told that I would be inducted into the Hall of Fame by the Golf Association of Ontario,” said Fritz. “I was excited and honoured. I was on a cruise in the Mediterranean at the time. The excitement got to me so much that I had to phone Dave and thank him all the way from Barcelona. I’d like to thank all of the other inductees for all of the work they have done to develop the game of golf. Thanks to everyone who is here and to the GAO for such a big honour.”

John Henrick was then recognized. He shared some of the thoughts he had before heading out for his Hall of Fame round of golf earlier in the day.

“I can’t thank you enough for this honour,” stated Henrick. “I am so proud to be a member of the golf scene, still as a player. My last competitive round was played in 2008 at Royal Woodbine and I shot a 70 on a par 72 course. My first competitive round I went to caddie but then herd my name called by the pro shop. Our pro told me I was to fill in for one of the pros. I shot a 74. Ladies and gentlemen 61 years later, I’m getting better!”

Only earlier in the day the final inductee Bob Weeks notified the GAO that he had a family emergency to tend to and would be unable to attend. However, his friend and colleague from SCOREGolf Kim Locke stepped in to say a few words.

“The last thing I wanted to do was to be here speaking for Bob,” said Locke. “I know how honoured and excited he was to have the opportunity to be here tonight. The SCOREGolf brand and its success over the years, without Weeksy, would not have grown and might not even exist today.”

Locke closed with the speech that Weeks had sent to him just hours before the ceremony.

“I have been so fortunate to be able to travel far and wide, meet people and enjoy this wonderful game of golf on so many levels. The best part of it all is just how many friends I have made, for that I am blessed. Not a day goes by that I don’t realize how lucky I am to do what I do. To be honoured here tonight is humbling and extremely exciting.”

With that the 2014 class entered the hall capping off an excellent Hall of Fame Day celebration.