Weir a stroke back, DeLaet tied for 6th at Byron Nelson Championship 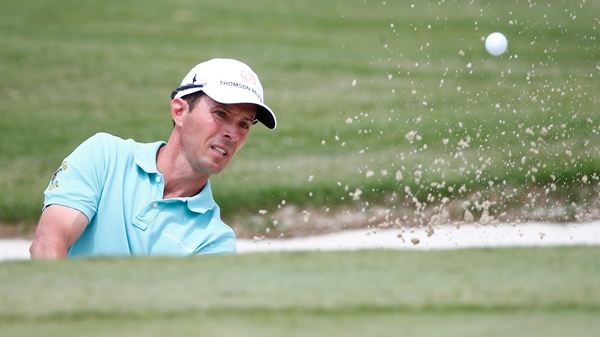 IRVING, Texas – Louis Oosthuizen is still looking for a remedy for his recurring back issues.

A victory at the Byron Nelson Championship would sure make him feel much better.

“The last year and a half was really frustrating,” he said.

Oosthuizen birdied four of the last five holes for a 6-under 64 on Saturday and a share of the third-round lead with Brendon Todd. The 2010 British Open champion had the low round of the day after recovering from bogeys on two of the first four holes.

“I made a nice birdie on 5, and just really made some good putts,” Oosthuizen said. “Every opportunity I had for birdie I actually made. My eye was good today, and I hit a lot of them really close.”

On the morning of the Nelson’s final round last year, Oosthuizen withdrew because of a neck issue. He missed extended time last season, and is still bothered by the back even though he won at home in South Africa in January.

Mike Weir, James Hahn and Gary Woodland were a stroke back.

“That’s what I’ve been working toward the last few years, to get myself back here in this position, and looking forward to the challenge,” said Weir, the 44-year-old left-hander.

Morgan Hoffmann twice fell out of the lead after hitting drives left into the water and making double bogey, at Nos. 11 and 18. He finished with a 68 and was tied for sixth at 8 under with three-time major champion Padraig Harrington, Marc Leishman and Graham DeLaet.

Todd’s only bogey was at the 420-yard fourth hole, when his approach went over the green and he two-putted from 8 1/2 feet. But that was sandwiched by long birdies.

After beginning the day with a two-stroke lead, Todd had to make a 4-foot birdie on No. 18 to regain a share of the lead.

“I wanted to get one more birdie under my belt so I could be that much closer to shooting the score I need to win Sunday,” Todd said.

Oosthuizen was 2 under and well off the pace after his bogey at No. 4, when he hit his second and third shots from the rough and then was in a greenside bunker. The South African blasted to about 10 feet and had to make that putt for bogey, then made three birdies in a row.

“It’s always nice finishing a round on a high,” Oosthuizen said. “You sort of feed off that the next day, and that keeps you going.”

Hoffmann was at 10 under and alone in the lead when he hit his drive into the water to the left at the 320-yard 11th hole, with Weir was just ahead on the green.

Weir sank a 2-footer for his fourth consecutive birdie to get to 10 under. Hoffmann then hit another drive after his penalty and wound up with a double bogey. But Weir missed putts from about 5 feet on both Nos. 15 and 16, the latter lipping the cup.

Hoffmann was again 10 under after birdies at Nos. 15-16, but hit his drive at No. 18 into the water and then hit twice out of the same greenside bunker.

Scott Scheffler, a 17-year-old top junior from Dallas playing on a sponsor exemption, made a hole-in-one using a 5-iron on the 218-yard second hole. He is the fourth amateur since 1983 with an ace in a PGA Tour event. That was part of his 69 that also included five bogeys and four birdies to get to 2 under for the tournament.

Dallas native Jordan Spieth, now 20 and ranked eighth in the world, made the Nelson cut as an amateur at ages 16 and 17. Spieth shot 73 on Saturday and was even par overall.