Oosthuizen tries to cope with a back injury 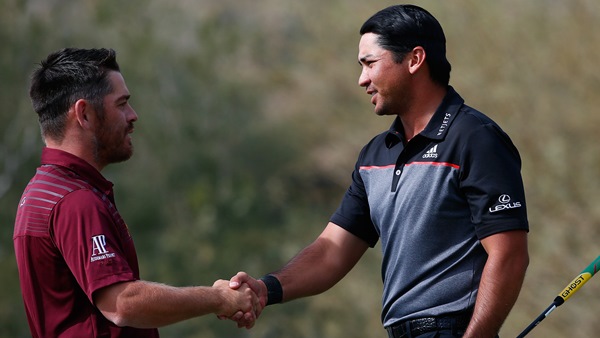 MARANA, Ariz. –  The most fickle part of the Match Play Championship for Louis Oosthuizen was his nagging back injury.

His luck ran out Saturday when he felt pain in his back while warming up on the range. When he first tried to hit a draw on the par-5 second hole, it got even worse. And one point, he was on his back on the 13th tee as his trainer tried to stretch him out.

“It’s a bit painful that it always happens when I’m playing well,” Oosthuizen said after losing on the 17th hole to Jason Day.

He was playing well enough that Oosthuizen required only 47 holes to reach the quarterfinals, the fewest of anyone. But it was a battle from the start, especially against a player like Day who has reached the semifinals the last two years.

Oosthuizen pulled off an unlikely birdie on the second hole to square the match, and he went ahead on the third with a 25-foot birdie putt. Day was able to at least try to drive the par-4 fourth green to set up a birdie, while Oosthuizen chose to lay back. Day won the hole and never trailed again.

“If I can commit myself to hit the shot, it’s not that bad,” Oosthuizen said. “But I can’t commit. My body is restricting me to go through the shot.”

Oosthuizen needs to get his back sorted out. He’s been dealing with it since last summer. Some weeks it feels good, other weeks not so much. He said it most affects him when he plays a long stretch of golf.

And this has been a long week.

“I’m glad to not be playing tomorrow,” he said with a smile. “I don’t want to be the first guy to withdraw from the finals or semifinals.”

Oosthuizen is scheduled to play the Honda Classic next week ahead of the next World Golf Championship at Doral. He said he would see how he feels in a couple of days, and might end up dropping Honda and adding the week after Doral at Innisbrook.

It’s the one area of Spieth’s game that he’s still trying to master as he enters his second full year on tour. When the golf isn’t going well, Spieth shows it.

“I could almost sense the frustration in Jordan today that he wasn’t quite playing the way he did yesterday,” Els said. “And I was kind of playing on that a little bit, just making sure if I was missing a shot, that I made sure that I got it up-and-down to keep kind of him at bay, or keep him frustrated.”

Spieth described himself as a “little mental midget out there,” as he constantly turned toward caddie Michael Greller.

“Actually kind of embarrassing looking back,” he said. “I was dropping clubs and just whining to Michael, and you just can’t do that. In match play, you’ve got to keep your cool. Any time you show that, it’s a weakness, and Ernie can take advantage of it.”

A LONG WALK: Rickie Fowler might have logged more miles than anyone this week, and not just because he has played 71 holes to reach the semifinals.

Fowler has been taking hikes up the mountain behind The Ritz-Carlton at Dove Mountain with his mother and sister, a peaceful way to end a day and a great place to watch the sunset over the high desert north of Tucson.

“The first night I went on my own, which was kind of fun,” Fowler said after his 1-up win over Jim Furyk. “My mom and sister came in on Tuesday, so made them go with me. And I guess we’re going to continue that. It’s been working. I’ll be going on a hike a little later this afternoon and go hang out up there and just relax and watch the sunset and go down and have some dinner at the hotel.”

Fowler said it’s about a 25-minute hike. Once they get to the top, they send pictures and used FaceTime with friends.

“It’s just a fun way to relax and enjoy the afternoon,” he said.

MIC CHECK: Jordan Spieth had to aim away from the hole from a bunker on the par-5 second. The idea was to splash out with some side spin, catch the fringe and have the ball trickle toward the hole.

It worked except for one tiny detail _ he forgot to have the TV microphone removed.

The ball struck the base of the microphone and stayed there. Spieth could only get up-and-down for par, and Els two-putted for birdie to win the hole.

A WORLD AFFAIR: For only the third time in 16 years of the Match Play Championship, the semifinalists are from four continents _ Australia (Jason Day), Africa (Ernie Els), Europe (Victor Dubuisson) and the United States (Rickie Fowler).

The first time it happened was in 2001 in Melbourne, when the semifinalists were from the United States (Steve Stricker), Africa (Els), Europe (Pierre Fulke) and Japan (Toru Taniguchi).

DIVOTS: At 44, Ernie Els is the oldest player to reach the semifinals in the Match Play Championship. The oldest winner was Kevin Sutherland, who was 37 when he won in 2002. … Victor Dubuisson is the 11th player to reach the semifinals in his Match Play debut. That includes the four semifinalists from the inaugural year in 1999. Geoff Ogilvy and Jeff Maggert are the only players to win in their first year. … Dubuisson has played 67 holes this week, the fewest of the four players remaining.