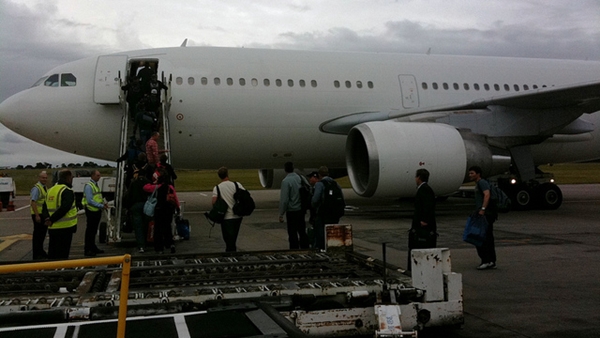 Since 2007 the RBC Canadian Open has been more than the third-oldest national open golf championship in the world and the lone Canadian stop on the PGA Tour. It’s had to get into the business of chartering flights for many of the players in the tournament field every year and it will be no different this month with the championship’s return to The Royal Montreal Golf Club. Tournament week is July 21-27.

Players like Ernie Els, Matt Kuchar, Graeme McDowell, Hunter Mahan, Jim Furyk, Stewart Cink as well as Canadians Graham DeLaet and David Hearn and others will board a charter flight for the trans-Atlantic journey to Montreal following the final round of the British Open at Royal Liverpool Golf Club in Merseyside, England, July 20.

It’s an arduous extra step Golf Canada officials have had to take ever since the championship was reshuffled on the PGA Tour schedule from its previous date in early to September to the third week in July – following the British Open.

“When we got the (new) date I knew, at least I felt, the only chance we had to get a solid field for the championship was to put on a jet. So we did and it still holds today,” says RBC Canadian Open tournament director Bill Paul. “I think if we didn’t have the jet we’d have a much tougher time getting players to come here.

“We’re not talking about a lot of players, just some players,” says Paul. “But what we do is very important to them…it’s the convenience of it.”

Upward of 33 players, their caddies and some family members will be on the flight which is scheduled to depart from Manchester, England, at 8 p.m. local time for the trip to Montreal. There are 102 seats available.

Each player is allotted three seats and while mostly it will be just a player and caddie, additional spots usually go to players traveling with family members.

Players headed to Montreal will gather in a hospitality area set up for the purpose by officials from the Royal and Ancient Golf of St. Andrews (R&A) which oversees the British Open. Buses will then transport them to the airport where another hospitality area awaits them until the flight is ready to be boarded.

A Golf Canada staff member is on site to assist the procedure, while Paul and his team take care of other logistics and last-minute issues related to the flight on this end.

And if the British Open winner happens to be among those scheduled to play at Royal Montreal, Paul says, “We’ll wait for him for as long as we can.”

Els is the only British Open winner since 2007 to play the Canadian Open the following week. But it wasn’t before the personable South African threw a scare into tournament organizers when he said during his victory speech at Royal Lytham & St Annes in 2012 he planned to spend time with his family and celebrate his second Claret Jug in London rather than fly to Canada for the championship being held that year at the Hamilton Golf & Country Club in Ancaster, Ont.

“I’m supposed to go to Canada but I think I’m going to blow that thing off,” Els laughed at time.

It turned out to be a joke as Els followed up by saying he would try to get the Canada by Tuesday of that week which he did only to miss the cut in Hamilton.

When it comes to chartering players around, since 2008 the RBC Canadian Open in a sense has partnered with the PGA Tour’s John Deere Classic in Silvis, Illinois, which is held the week before the British Open. Because organizers there want to secure the best field possible for it tournament, they charter a flight to take British Open-bound players overseas on Sunday night after final round of the John Deere.

“What we do is a little different from most tournaments on the PGA Tour, but the fact is it’s now part of what we do,” says Paul. “It’s unfortunately a given, and I don’t say that in a negative way, but we’ve accepted that and we do what I think is a first-class job organizing it and getting guys from that tournament site.

“I’ll probably have a 132 people that want on that plane on the Wednesday of British Open week,” he says. “It happens every year and somehow it gets down to between 90 and 102 people.”

For more information on the 2014 RBC Canadian Open, click here.