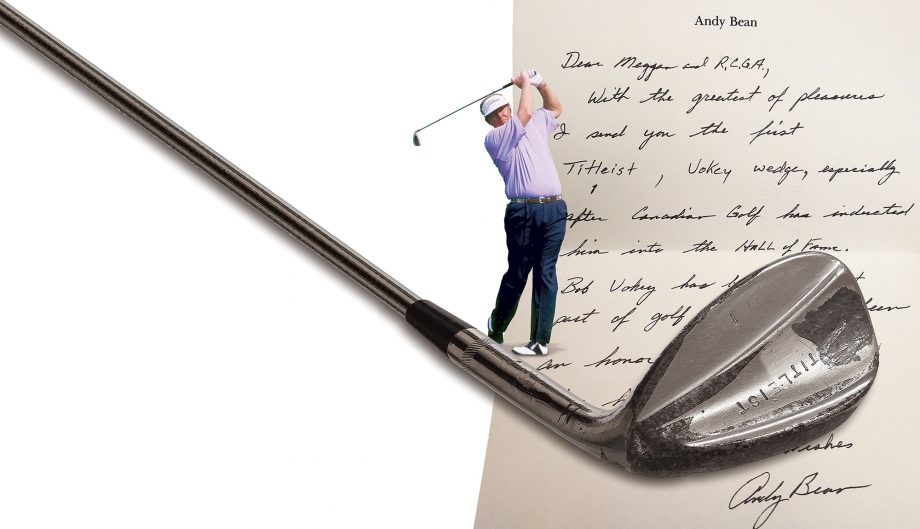 It was a repatriation of sorts when I received an unexpected phone call from 11-time PGA Tour winner Andy Bean.

“Meggan, have I got something for you,” he said, as we got to the reason for his call. “Would you (the Canadian Golf Hall of Fame & Museum) like the very first Vokey wedge ever used on the PGA Tour?”

My heart leapt. Not only was I getting a call from a noted PGA Tour winner but he was offering to donate an incredible artifact that has since rewritten the way manufacturers and professionals craft wedges. Currently, Vokey Design products are used by players all over the world — including major champions Jordan Spieth, Adam Scott and Justin Thomas — and at every level of the game.

“Yes!” I emphatically replied. “Did you win any tournaments with it?”

“Unfortunately,” Bean continued, “I did not win any tournaments with that wedge. But it certainly was not the wedge’s fault! And you can quote me on that.”

Bean then proceeded to tell me the amazing story of how he essentially stole the club from legendary designer and Canadian Golf Hall of Famer Bob Vokey and continued using it until the wedge was too worn down to play with.

When he was moving towards the design of wedges for Titleist, it was a new endeavour not only for Bob Vokey but for Titleist as well. The company had been aiming to make a push in the wedge market.  Vokey had primarily been focused on designing woods but he was always fascinated by the intricacies of wedges and their vast needs by amateurs and professionals.

Tinkering in his workshop, he would eventually produce a prototype that he was comfortable enough to try out on the range. In 1997, Vokey was attending an event in which Bean was playing and approached him on the range. As Bean recalls, Vokey was humble in his approach and asked if he could spend five minutes swinging his prototype. Bean obliged and after swinging the Vokey wedge, he said that he loved the club and he was going to play with it for the weekend.

Vokey was shocked, as much by the player’s reaction as the reality that he had only made that club as a single prototype. It was never meant to be used in a tournament.

“If you are as good a clubmaker as I know you are, you can make another one,” Bean responded.  “I’m playing with this one for the week.”

The prototype wedge arrived by mail two weeks after the Canadian Golf Hall of Fame induction ceremony for Vokey and Judy Darling Evans at Glen Abbey GC, which took place during the 2017 RBC Canadian Open.

A note was attached:

With the greatest of pleasure, I send the first Titleist, Vokey wedge, especially after Canadian Golf has inducted him into the Hall of Fame.

Bob Vokey has been a great part of golf and it has been an honour knowing him and using his equipment.

I sent Andy a note letting him know that I received the club and thanked him very much for the incredible donation to the museum’s collection of artifacts.  “Did you want a tax receipt?” I asked.

“No, that’s okay,” Bean replied. “I only ask that if for any reason you ever get rid of the club, that it is donated to the World Golf Hall of Fame.”

I laughed at the thought, and affirmed my intentions.

“You don’t have to worry about that, Andy. It’s now home.”