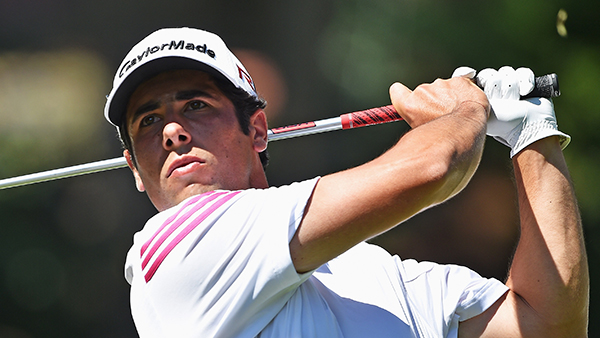 PRETORIA, South Africa – Adrian Otaegui of Spain shot an 8-under 62 Friday to take a two-shot lead at the Tshwane Open in South Africa.

Otaegui had a small chance to shoot the first 59 in European Tour history when he needed to pick up two shots on the last two holes. But he settled for par on No. 17 after just missing a chip-in for birdie, and then bogeyed his last hole, his only dropped shot of the day.

The 22-year-old Otaegui still made nine birdies at the par-70 Pretoria Country Club, jumping 18 places up the leaderboard and moving to 11-under 129. South Africa’s Merrick Bremner was second on 9 under after a 66.

Overnight co-leader David Horsey dropped three shots off the lead in a tie for third on 8 under with Keith Horne, Edoardo Molinari and Trevor Fisher Jr.

Fisher, who won the Africa Open last weekend, made four straight birdies from No. 6, but also had three bogeys in his 66.

Former Ryder Cup winner Molinari was in position for his first victory on the tour in five years after a second straight 66, with four birdies and no bogeys.

Morten Orum Madsen of Denmark, who shared the first-round lead with Horsey, dropped to a tie for 13th after a 72. European Ryder Cup captain Darren Clarke boosted his chances of a top-10 finish with a 67 to move to 2 under.