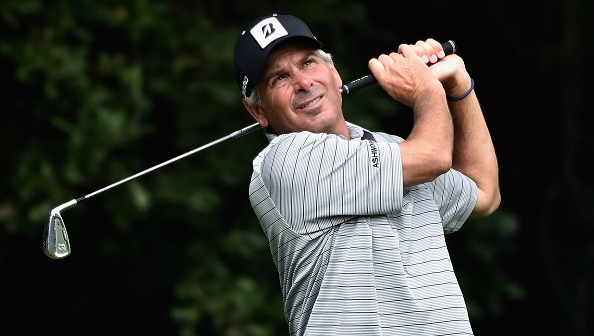 CALGARY – With a sore back that has limited him to playing just five Champions Tour events this season, Fred Couples knows that defending his Shaw Charity Classic title this weekend won’t be an easy task.

Fortunately for him, he’s been known to tear it up at Canyon Meadows Golf and Country Club.

Couples won last year’s event at the Calgary course in thrilling fashion by chipping in for eagle on the par-5, 18th hole to shoot a course record 9-under 61 before beating Billy Andrade in a one-hole playoff.

In order to win back-to-back titles, Couples will have to fend off challenges from the likes of Charles Schwab Cup points race leader Colin Montgomerie and Jeff Maggert, who has already won a pair of majors – the Regions Tradition in May and the U.S. Senior Open Championship in June – this season.

“The main thing is I like the course,” said Couples. “I feel like I should play well here and I want to play here every year and hopefully in the next few years win it again before I get too old.

“I grew up in Seattle and we don’t play a ton of courses that remind me of Jefferson Park where I grew up playing. I like the greens, I like the shape of the holes and I seem to play well here.”

This will be Montgomerie’s first time competing in Calgary, while Maggert is looking to improve upon his performance from last year when he finished in a tie for 27th place at 6 under.

“I had a great start obviously, winning a couple majors, and I’m in position to make a run for the Charles Schwab Cup,” said Maggert, who sits third in the standings behind Montgomerie and Bernhard Langer, the latter of whom isn’t competing in Calgary this weekend. “My game’s in good shape, so looking forward to a good week here. Last year was my first time here. I thought the golf course was fabulous, so I’m looking forward to getting back.”

Other golfers in the top 10 in the points race who are competing in Calgary include Kevin Sutherland (fifth), Joe Durant (sixth), Lee Janzen (seventh), Esteban Toledo (eighth), Andrade (ninth) and Woody Austin (10th).

Couples will start the first round on Friday morning in a group with Montgomerie and Miguel Angel Jimenez, who ranks 15th in the Charles Schwab Cup points standings despite playing in only five Champions Tour events so far this season.

“I have the game to win any week,” said Jimenez, who won the opening event of the season, the Mitsubishi Electric Championship at Hualalai on Jan. 25 in Hawaii. “You have to respect the rest of the guys. They’re very good players, competitors, and anyone can win the tournament. My game is there – just keep passionate, keep playing golf and let things happen.”

Meanwhile, Maggert will play in a group on Friday with Mark O’Meara and Calgary’s Stephen Ames, who finished well back of the field last year at 4-over par through three rounds of play.

“It’s nice to come home and see a lot of familiar faces walking around, which is beautiful,” said Ames, who grew up in Trinidad and Tobago before becoming a Canadian citizen in 2003.

The field also features four other Canadians in Rod Spittle of Niagara Falls, Ont., Calgary’s Darryl James as well as Jim Rutledge and Rick Gibson, both from Victoria.