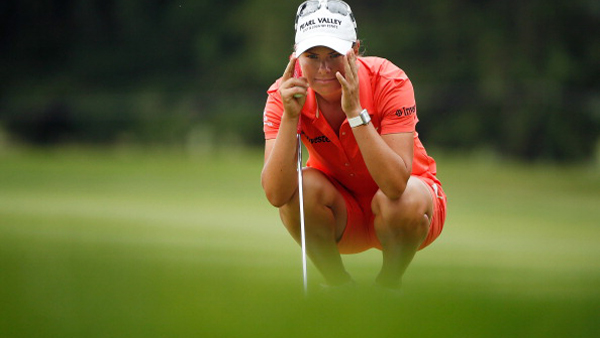 SYLVANIA, Ohio – Lee-Anne Pace made a name for herself as an amateur in her native South Africa, then proved herself with eight wins on the Ladies European Tour.

Now she’s ready to make waves in the U.S.

Pace shot a 3-under 68 on Saturday to grab a share of the third-round lead with Laura Diaz in the Marathon Classic. She can barely express what a breakthrough win on the LPGA Tour might bring.

“It’ll mean quite a lot to be able to come out here and play well,” she said after recovering from bogeys at 11th and 12th holes with three late birdies. “It already has made my week. I was so tired in the beginning of the week and now this has happened, so I’m very excited.”

Pace could have foundered after losing the two shots to par. But she came right back to birdie the next two holes and then added another at the par-5 17th to join Diaz at 11-under 202.

The 33-year-old, in her 10th year as a pro, wants to keep it simple in the final round at Highland Meadows.

“I play a very similar type of game every time I go out there: Hit the fairways and try to hit the green and make the putt. And so far it’s been working,” she said. “Hopefully, coming down the stretch it’s going to be enough.”

It was a day of highs and lows for Diaz, the leader since birdieing her first five holes in an opening 62. She led by four and then three strokes after the first two rounds.

Chasing her first win since 2002, she could have regained the outright lead but left a 7-foot birdie putt short on the 18th to finish with a 71.

Up by three shots on the fourth hole on Saturday, the 39-year-old faltered with a double-bogey.

After pull-hooking her drive under a pine tree, she and caddie Pete Smith moved away some twigs and the ball moved. The gallery around her let out a collective gasp. She quickly assessed herself a one-shot penalty and ended up punching back to the fairway, hitting to the green and two-putting for the double.

By the time Diaz got to the tee at No. 9, rookie Jaye Marie Green’s torrid play had pulled her into a tie for the lead. Playing one group ahead, Pace would nail a 20-foot birdie putt from the fringe to join them.

But before Pace’s putt, Diaz hit the shot of the day.

Officials had moved the tees up on the 255-yard, par-4 hole to allow players to go for the green off the tee. Pace and playing partner So Yeon Ryu, the 2012 winner of the Marathon, vacated the putting surface to allow Diaz and Lydia Ko to hit their drives. Diaz’s ball landed 25 yards short of the green and had a bead on the pin before edging past. Diaz later rolled in the 10-foot downhill eagle putt to regain a two-shot lead.

Diaz bogeyed the 12th. The lead remained one shot until Pace hit into the deep rough near the bunker fronting the par-5 17th, dropped a delicate gap wedge to 8 feet and then rolled in the birdie putt to forge the tie.

Asked if a player can ever forget how to win after a long respite, she said, “I can’t say that I knew how to do it then, and I don’t know that I know how to do it now.”

Green applied pressure with a low round early on the cloudy day.

The medalist in last year’s LPGA Tour qualifying school, she turned in 30 and birdied four holes in a row before closing with a par on the par-5 closing hole. The 63 allowed her to climb from a tie for 31st at the start of the day to a share of the lead before Diaz’s eagle.

Eighteen players are within four shots of the lead.

Pace sounded thrilled by the all the potential mayhem.

“Yeah, the whole LPGA is chasing,” she said.

Canada’s Rebecca Lee-Bentham slipped down the leaderboard into a tie for 19th at 6-under 207. The Team Canada member carded a 72 on moving day.

Quebec’s Maude Aimee-LeBlanc shot 69 Saturday. She’s sitting at 3-under 210 and is tied for 43rd.