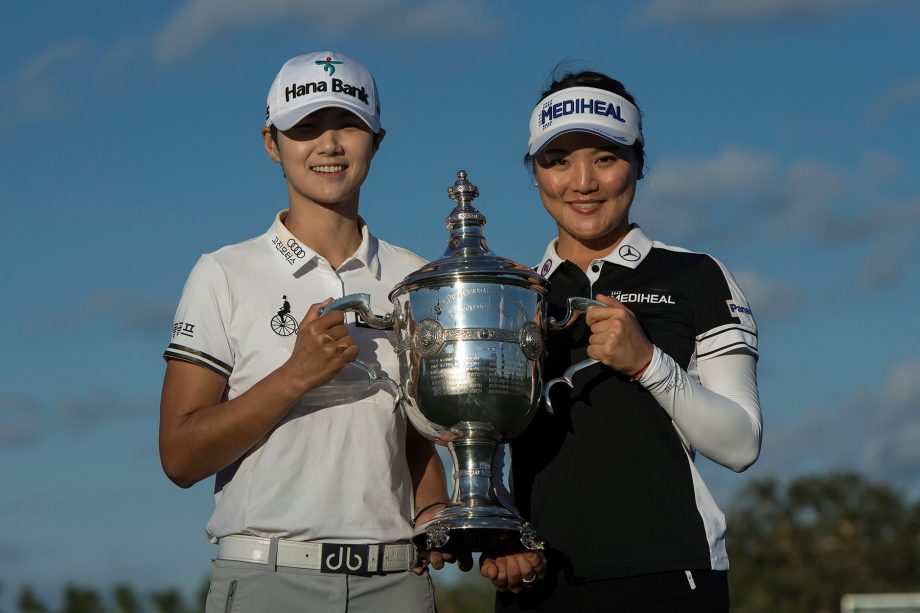 NAPLES, Fla., – Sung Hyun Park and So Yeon Ryu, the 2017 and 2014 CP Women’s Open champions, have became the first LPGA golfers in history to share the Rolex Player
of the Year Award at the conclusion of Sunday’s CME Group Tour Championship.

Entering this week’s 2017 LPGA season finale, Ryu held a three-point lead over Shanshan Feng and a five-point lead over Park in what had been a tightly contested race all season. Ryu’s T30 finish combined with Park’s T6 result on Sunday at the CME Group Tour Championship put the duo even atop the standings at 162 points.

Park is the first player to win the Rolex Rookie of the Year and Rolex Player of the Year awards in the same year since Nancy Lopez achieved the feat in 1978.

“It’s a great, great honor to be walking the same path as a great player as Nancy Lopez,” Park said. “After accepting this award, I will continue to try hard and work hard at my game.”

It can be argued that Park has completed the most successful rookie year in LPGA history. She clinched the 2017 Louise Suggs Rolex Rookie of the Year Award in October, spearheaded by her first LPGA, and major championship, victory at the U.S. Women’s Open in July followed by her win at the CP Women’s Open six weeks later. All told, she carded 11 top-6 finishes in 23 events and ends the year as the second ranked player in the world.

Arriving to the LPGA from the KLPGA Tour, where Park won seven times in 2016 and had climbed to No. 10 in the Rolex Women’s World Golf Rankings by year’s end, Park’s rise in women’s golf was the worst kept secret from afar. After top- six finishes at three LPGA major championships in 2016 (T2 at The Evian Championship, T3 at the U.S. Women’s Open, T6 at the ANA Inspiration), none of her newfound LPGA peers held Park to the standard expectation of an ordinary rookie.

Park was also in contention for the CME Group Tour Championship and Race to the CME Globe titles and the Vare Trophy as she led this weekend’s tournament by three shots after 36 holes, and briefly led on the front nine on Sunday. Her bogey-free, final round 3-under par 69 enabled her to stay on the first page of the leaderboard and clinch the prestigious honor.

“I didn’t quite expect to receive the award,” Park said. “David (Jones), my caddie, told me that there is a chance I could accept the (Rolex) Player the Year Award. When it was decided and I did find out … I was very happy.”

Ryu, the 2012 Louise Suggs Rolex Rookie of the Year recipient, enjoyed a year that included her second major championship, at the ANA Inspiration in March, her fifth LPGA triumph at the Walmart NW Championship Presented by P&G in June, two runner-ups and a pair of third-place finishes. A gritty Ryu endured through a shoulder injury and built up enough of a tolerance for pain to shoot 4-under on the final 36 holes this weekend.