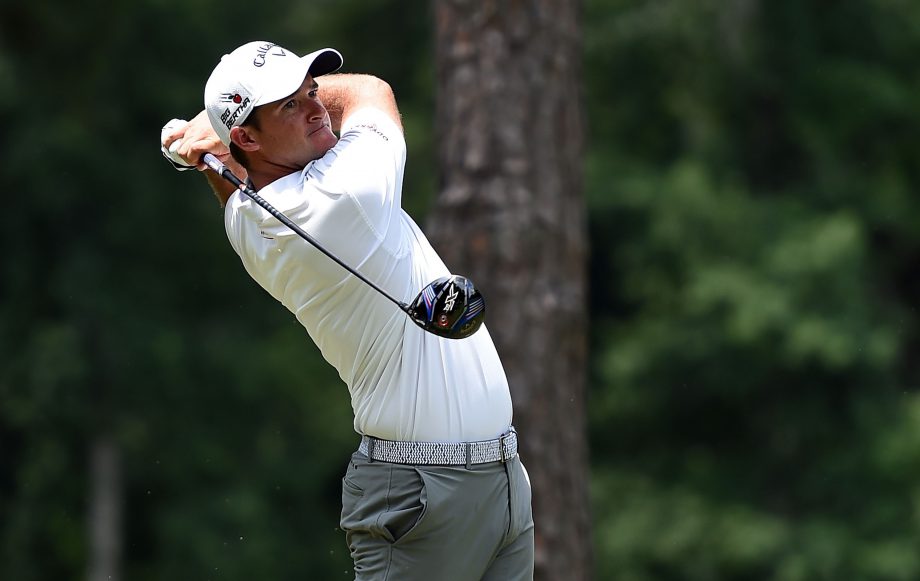 OPELIKA, Ala. — Sam Saunders, Arnold Palmer’s grandson, shot a 7-under 64 in warm conditions Thursday to take the first-round lead in the inaugural Barbasol Championship.

“It’s hot. When it’s hot like this, you’ve got to conserve energy,” Saunders said. “So, getting excited about a birdie or getting mad about a bogey just burns energy that you need to try to hit good shots. I try to walk like I’m in a daze out there all day and just stay very level.”

Saunders saved par with a 15-foot putt on the par-3 eighth hole and closed with a birdie on the par-4 ninth to cap his bogey-free round on Grand National’s Lake Course.

“I just putted a lot better,” Saunders said. “I’ve been playing really well lately, been hitting the ball as well as I’ve ever hit it in my career in the past few weeks, really last month. I just had been putting terribly. I finally just had a few putts go in today and that always turns over into a little bit of confidence and it was really just that.”

The 27-year-old former Clemson player is winless in 45 career starts on the PGA Tour, with a career best tie for second this year in the Puerto Rico Open.

“It is just the first round, yes, but it’s always nice to get off to a good start,” Saunders said. “You have to hit the ball well here and I did that today. I drove it well and I hit a lot of good iron shots. You don’t have to putt great here, I think, to shoot a good, solid score, but to shoot 7 under, I had a lot of putts go in for me today, which is nice. I haven’t seen that happen in a long time, so it was great.”

Jason Gore was a stroke back at 65. He birdied four of his last five holes.

“The golf course is just there for the taking,” Gore said. “It’s a great golf course. If these are the scoring conditions, not a breath of wind, greens were holding, you just kind of had to go out and take advantage of it.”

Stanford junior Maverick McNealy, the Jack Nicklaus Award winner as the Division I player of the year, was tied for third at 66 along with Martin Flores, Will Wilcox, Carlos Ortiz and Carlos Sainz Jr.

McNealy, playing alongside Saunders, had an eagle, five birdies and two bogeys.

“I love to play and I love to compete,” McNealy said. “To compete against the best in the world and on a golf course like this that’s in perfect condition and do all that, that’s what every kid dreams of, playing on the PGA Tour. So, I’ve just had a blast. It’s all fun for me.”

Argentina’s Emiliano Grillo, the highest-ranked player in the field at No. 98, opened with a 68.

Web.com Tour money leader Patton Kizzire had a 71. He’s from Montgomery and played at nearby Auburn.

“I hit the ball really well,” Kizzire said. “My putting was pretty suspect. That was about as bad as I’ve putted in a long time. Feel like I turned a 64 or 67 to 71, which is not a whole lot of fun. But I’m encouraged by the way I’m hitting the ball and just looking forward to tomorrow.”