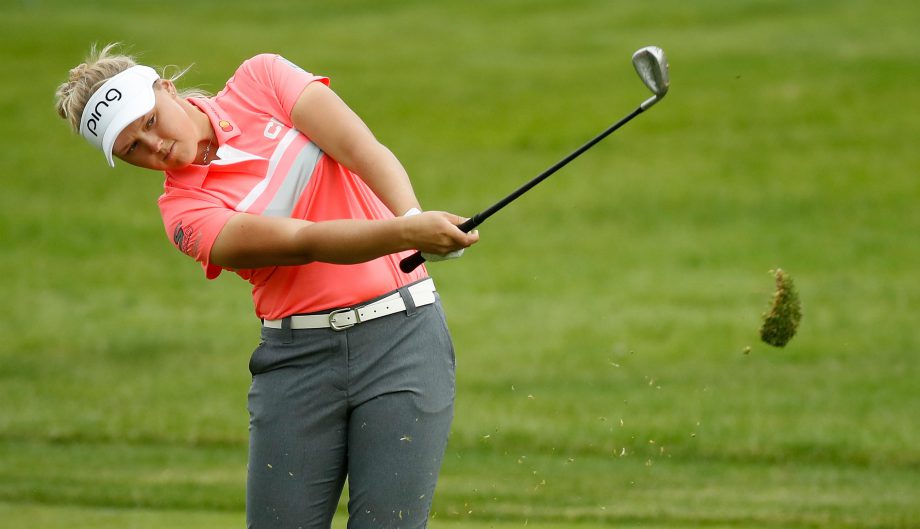 Sung Hyun Park leads the LPGA Volvik Championship after 36 holes. Park shot a 65 to enter the weekend at 12 under.

Minjee Lee cost herself a top-10 finish last week when she failed to sign her scorecard. She is in a tie for second after a second round 66, with Suzann Pettersen (67).

It was quite a gaffe, obviously, but it didn’t change the fact that the 20-year-old from Australia was playing pretty well.

“Obviously, it was my fault,” Lee said. “I played good last week and I know my game’s there.”

“I feel pretty comfortable out there,” said Lee, a three-time winner on the LPGA Tour. “I mean, I was having fun out there and kept it pretty light with my caddie. Yeah, just played golf really.”

“I holed a couple long putts & my shots into the green were good as well. Just solid all around today” @minjeegolf leader (-10) @VolvikLPGA pic.twitter.com/1oETM0womE

Lee, who turns 21 on Saturday, was disqualified from the Kingsmill Championship because of the mistake with her scorecard. She seems to have put that behind her, and she wrapped up her round Friday with a birdie on No. 9.

On that final hole, playing partner Charley Hull’s approach shot struck Lee’s ball, which was already on the green, so the players had to deal with that unusual situation.

“They said move it three inches so that’s what we did,” Lee said.

Lexi Thompson, who had her own huge penalty at this year’s ANA Inspiration, was in Lee’s group. She shot 68 and moved to 4 under.

Park birdied six holes on the back nine, and the rookie from South Korea appears to be playing with confidence. She was the top earning player in the Korean LPGA last year and also had four top-10 finishes in seven LPGA Tour events. She has three top-10 LPGA Tour showings this season.

“I think I’ve definitely felt the pressure and that’s probably one of the biggest reasons why I haven’t performed up to my standards this year,” Park said through a translator. “But I think this week I’m able to let things go a little bit more and play my game.”

Sung Hyun Park finishes with a birdie to take a two shot lead at 12-under ??#VolvikLPGA pic.twitter.com/VCLYDgy9Y0

Aside from Park, Lizette Salas was the only player to shoot a 65 on Friday on the 6,734-yard course at Travis Pointe Country Club. She was at 9 under after missing the cut last week.

“I kind of started off from scratch after Kingsmill after I missed the cut, so I just started from ground zero and worked my way here,” Salas said. “Just really having fun. I love Michigan golf and I finished second in Grand Rapids a couple years ago, so I don’t know, just kind of got my groove back, I guess.”

Top-ranked Lydia Ko is not playing in this event, and the other top players in the Rolex Rankings haven’t been at their best. Third-ranked Jutanugarn made some progress Friday, but second-ranked So Yeon Ryu (71) barely made the cut at 1 under. Her streak of 11 straight top-10 finishes is in jeopardy.

“When you play bad, you can find, ‘OK, I have to fix these.’ Or, ‘I have to do this one better,”’ Ryu said. “But I couldn’t really feel it this week. I don’t even know. I cannot hit it well, I cannot really putt it well. So hopefully it’s going to drop for this weekend.”

The top ranked Canadian is Smiths Falls Ontario’s Brooke Henderson. She is a tie for tenth after a second round 66.

Henderson went out in a bogey free, 4-under par 32 on the front nine, and recorded three more birdies and just one bogey on the back nine, to finish at 6-under for the day (66).