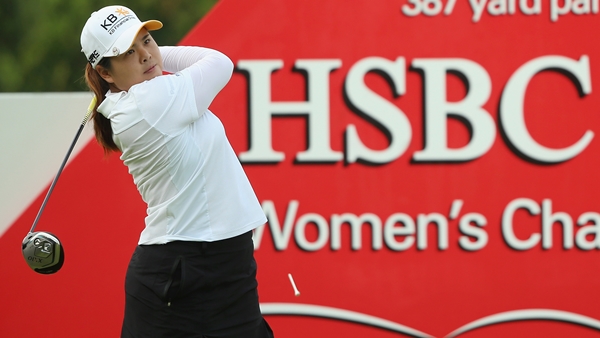 SINGAPORE – Inbee Park and Yani Tseng both shot 6-under 66 on Thursday to share the lead after the opening round of the HSBC Women’s Champions.

Park’s sixth birdie on the par-5 18th at Sentosa Golf Club left her tied with Tseng, who carded seven birdies and one bogey.

Angela Stanford of the United States was in third place, one stroke back.

“The front nine is a tougher nine,” said Park, who had five birdies after the turn. “I didn’t play too aggressively on the front nine, but the back nine I had a lot of shots.”

Tseng also had a late charge, with birdies on four of her last seven holes to build momentum heading into the second round.

Top-ranked Lydia Ko offset two bogeys with six birdies for a 68 and was tied for fourth with Karrie Webb, Jenny Shin, Mo Martin and Mariajo Uribe.

Paula Creamer, who won last year’s tournament with a 75-foot putt, struggled to a 74. Michelle Wie had a 73 that included a double-bogey on the par-5 No. 7.

“I hit a low controlled 7-iron from 150,” Thompson said of her ace. “It was looking good the whole way, so I was just waiting for it to drop. I let go of my club. I don’t even know what I did honestly.”