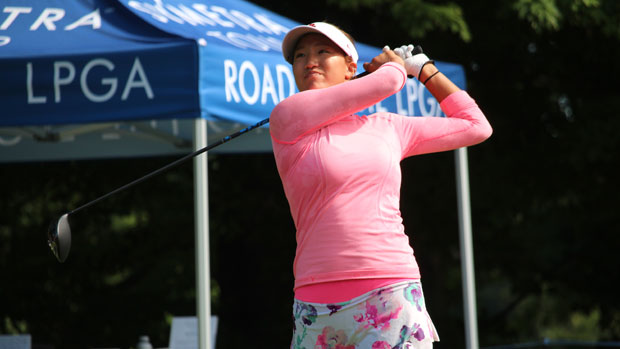 ROCHESTER, N.Y. – In just her fourth event as a professional golfer, Annie Park (Levittown, N.Y.) gutted out her first victory by the narrowest of margins in the final round of the Toyota Danielle Downey Classic at Brook-Lea Country Club on Sunday. She posted a 4-under 68 and survived a late rally from 2011 Solheim Cup member Vicky Hurst (Melbourne, Fla.) to win at 16-under 272, one stroke ahead of Hurst.

“I’m speechless, this is my first professional win and it has been happening all so fast,” said 20-year-old Park. “For me to win this tournament is crazy right now.”

The former NCAA national champion (2013) was challenged early and late by Hurst, who made birdie on the second hole to cut the deficit to two shots. Composed beyond her years and experience, Park responded with birdies on the third, fourth and sixth holes to get to 15-under and a four shot lead.

At the turn, Park held a four shot lead. Hurst made up ground with an eagle on the 10th hole. Park made bogey on the 13th and all of a sudden the lead was back down to two shots. On the 15th hole, Hurst rolled in a birdie to cut the deficit to one shot. Park misjudged the wind on 17 and 18 and had to make two very difficult up-and-down pars to hold off Hurst.

“I knew Vicky is a phenomenal player and I knew she was going to play great today, she was putting so well,” said Park. “I miscalculated yardages on 16, 17 and 18, but for me to make that 7-foot par putt on 17 was shocking to me. I was like ‘yes, I made it’.”

With a one shot lead, Park left her tee shot on the par-3 18th hole short and it rolled down the classic Donald Ross designed front slope. She chipped up to a foot and tapped in for par. Hurst missed a 15-foot putt that would have forced a playoff.

“I don’t know how I converted that chip shot,” said Park with a wide smile. “I thought Vicky was going to make the putt so I was ready for a playoff, but I am just speechless.”

Park said that this round was one of the best of her life considering all the circumstances.

“Every shot was some of the shots of my life,” said the former USC Trojans golfer. “If I had to pick one shot, it was the par putt on 17, that was so nerve-racking.”

The first place payout vaults Park from 93rd on the Volvik Race for the Card money list to 17th with nine events remaining in the season.

Park is the third rookie to win on the Symetra Tour this season (Augusta James – Chico’s Patty Berg Memorial and Haruka Morita-WanyaoLu – Symetra Classic). Park is now third amongst rookies in earnings behind Morita-WanyaoLu and James, who are both inside the top 10.

Nancy Lopez, who was the honorary host of the event, addressed the packed crowd on the 18th green during the trophy ceremony. When Park spoke, she said that she wrote an autobiography on Lopez during her sophomore year of high school.

“Growing up, I looked up to Annika Sorenstam and Nancy Lopez,” said Park. “I did a lot of research on her and it was great to be able to meet her in person today.”

Hurst’s second place finish skyrockets her from 127th on the Volvik Race for the Card money list to 30th. Maude-Aimee Leblanc turned in a 4-under 68 on Sunday to finish in a tie for third at 8-under 280. She moves from 13th to eighth on the money list.

BROOKE HENDERSON TIES ROUND OF TOURNAMENT: Brooke Henderson (Smiths Falls, Ontario) wasn’t thrilled with her first three rounds of the Toyota Danielle Downey Classic. She admitted making mistakes she doesn’t normally. On Sunday, she posted a 6-under 66 to tie the low round of the tournament and finish in a tie for seventh at 7-under 281.

“It was a lot fun today, it wasn’t anything special until the back nine when I made some birdies late and I had my cousin on the bag and he gave me a lot of good reads,” said Henderson. “It is always awesome to be able to finish strong on Sunday.”

Henderson, who started on the back nine, made three birdies and an eagle on hole seven on her second nine. She started the day in a tie for 34th.

“I wasn’t super happy with the way I played this week, I made mistakes I don’t normally,” said Henderson. “I got a little more focused today and I was able to dial it in a little better and it is really good momentum moving forward.”’

Henderson will play in the Fuccillo Kia Championship at Capital Hills on the Symetra Tour next week in Albany.

“Every week, I’m trying to get a little better and improve on some things,” said Henderson, who has the RICOH Women’s British Open in two weeks. “Next week, I’ll really have to take good notes during the practice rounds and continue to gain more knowledge as the week progresses.”

Henderson is now 39th on the Volvik Race for the Card money list.