Park wins US Women’s Open in front of President Trump 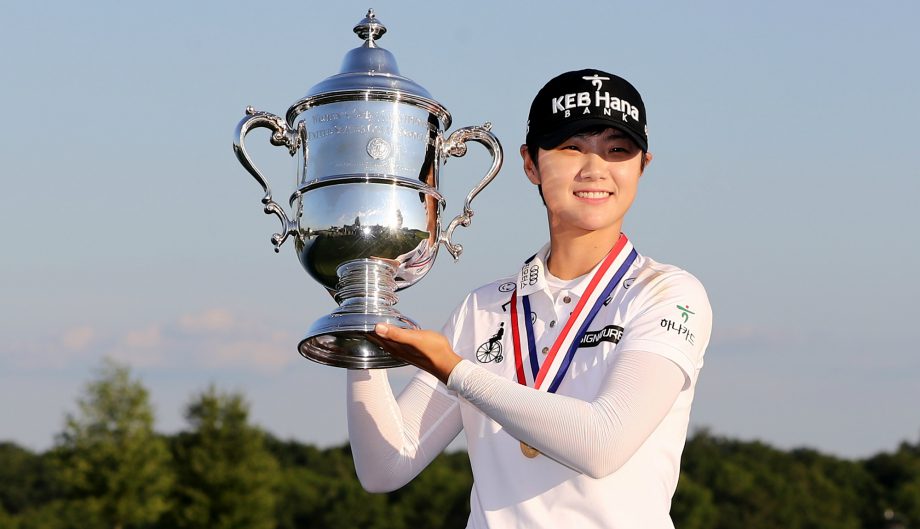 The 23-year-old from South Korea shot her second straight 5-under 67 and won a final-round battle with front-running Shanshan Feng and teenage amateur Hye-Jin Choi at Trump National Golf Club.

Park birdied the 15th to move into a tie for the lead and the 17th to open a two-shot edge after Choi made a double bogey on the previous hole. Park finished at 11-under 277 for a two-stroke win over Choi.

President Donald Trump attended the biggest event in women’s golf for the third straight day. There was a peaceful protest after he arrived at his box near the 15th green shortly after 3 p.m.

It ended up being a quiet week of politics. The golf was excellent.

Walking to the scoring tent to sign her card, she got a thumps-up from Trump from his box.

Choi finished with a 71 to finish as the low amateur for the second straight year. She was 38th in 2016.

South Koreans Sei Young Kim (69), Mirim Lee (72) and Amy Yang (75) tied for eighth at 5 under. Marina Alex of nearby Wayne, New Jersey, was the best of the American at 4 under after a 70. It was the worst finish in the Open for the top American since Paula Creamer was seventh in 2012.

Choi was the story for most of the final round. The 17-year-old had a two-shot lead with nine holes to play and needed a birdie at 15 to regain a piece with Park.

The 139-yard, par-3 16th over water ended her hopes. Her tee shot landed in the water to the right of the hole. She ended with a double bogey and basically lost her chance of becoming the second amateur to win the Open. She birdied the final hole.

Catherine Lacoste remains the only amateur to win the Open, doing it in 1967.

Feng, who was the leader after the first three rounds and carried a one-shot edge into the final 18 holes, triple bogeyed the final hole.

The win was redemption for Park, who is the leading rookie on the LPGA Tour this year. She had the 36-hole lead in the Open last year and shot final rounds of 74-74 to finish two shots out of a playoff with eventual champion Brittany Lang and Anna Nordqvist.

Park saved her best for the last two rounds this year and won. It was not her first professional win, she won seven times on the KLPGA Tour in 2016 and three times the year before.