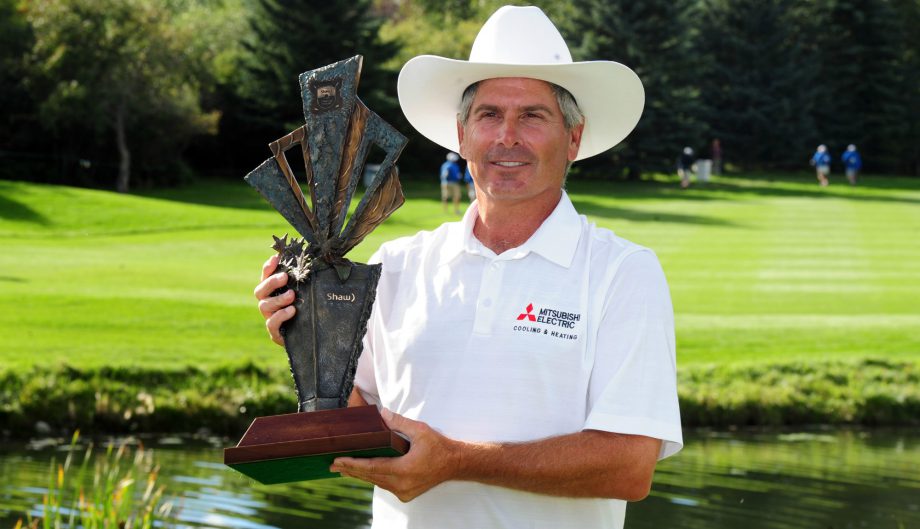 The former champions of the award-winning PGA TOUR Champions event – Franco (2016), Maggert (2015), Couples (2014) and Mediate (2013) – have all confirmed they will return for the fifth anniversary celebrations of the Shaw Charity Classic at Canyon Meadows Golf and Country, August 30 – September 3, 2017.

“I was so happy to finally win my first tournament on this Tour and to do it in Canada was extra special,” said Franco, who teamed up with Vijay Singh to win the Bass Pro Shops Legends of Golf earlier this year. “I love the people in Canada and the memories of last year in Calgary will always have a special place in my heart. I can’t wait to get back Canada to relive some of those memories and hopefully successfully defend my title.”

Three other big names also have good vibes around the Canyon Meadows track.

Jeff Maggert, who donned his white Stetson two years ago after blitzing the field and the greatest names in the game with a four-shot win, will be back in cowboy country in hopes of becoming the first second-time winner.

“I have lived in Texas for 40 years so I’ve seen a few cowboy hats in my time. It felt good to put one on in Calgary, and I definitely cherish it,” said the 53-year-old Maggert, “Everyone thinks just because you’re the defending champion you’re going to come in and it will be an easy week. If you look at the history of golf tournaments, that rarely happens. I wasn’t able to do it last year, but I sure hope to add my name onto that trophy for a second time.”

Maggert’s five wins on the senior circuit, including two majors, topped his total of three wins during his 25 years on the PGA TOUR. The 53-year-old is one of eight players to win on all PGA TOUR sponsored tours – PGA TOUR, Web.com, and PGA TOUR Champions.

Calgary golf fans will also welcome back one of their most famous adopted sons, Fred Couples. A crowd favourite since the tournament’s inception in 2013, Couples won the 2014 event in thrilling fashion after a career-best final round 61 that included a chip-in eagle on the 54th hole. He got sized up for a white cowboy hat of his own after winning the first playoff hole over Billy Andrade.

“Calgary has been a very enjoyable place for me. Last year I wasn’t physically able to compete, but I have always said, as long as I’m healthy I plan on coming here every year,” said Couples. “The people at Shaw are incredible. The crowds are huge. The course is always in great shape and I feel like I can play it well. There is nothing more a player could ask for. I look forward to getting back there.”

Couples’ 13th victory on the PGA TOUR Champions came two weeks ago at the Chubb Classic, American Family Insurance Championship. A winner of 15 PGA TOUR events, the smooth swinging Couples is remembered most for his 1992 triumph at the Masters Tournament. Once graduating to the senior Tour, he made an immediate statement. Finishing second in his first start, he went on to win his next three events, becoming the first player ever to win three of his first four tournaments. Couples has two major championship victories on the PGA TOUR Champions: 2011 Senior Players Championship, and The Senior Open Championship in 2012.

While more than 40,000 fans lined the fairways at Canyon Meadows to catch a glimpse of Couples’ debut at the inaugural event in 2013, they left talking about Rocco Mediate who was the first player to get white-hatted on the 18th green.

Mediate captured the hearts of Calgarians when he was crowned the inaugural champion with a seven-shot victory while tying the lowest 54-hole total at 22-under-par 191 on the PGA TOUR Champions. Since dusting the field in 2013, Mediate won his first major on the senior swing last year, when he finished on top at the 2016 Senior PGA Championship.

“What can I say – Calgary is one of my favourite places on earth so I can’t wait to get back up there again,” said Mediate. “It really is the people who make this event what it is. Everyone in the community comes out to support the event with the primary goal to raise money for youth-based charities. The money they have raised for children’s charities is just crazy. I don’t know how they do it. It just doesn’t happen anywhere else so I’m very proud to have my name attached to this tournament.”

One of the most colourful characters in golf, Mediate won six PGA TOUR events. His only other victory on the PGA TOUR Champions also came in 2013 when he won the Allianz Championship.

The four former champions add additional firepower to a star-studded class in 2017 that already includes World Golf Hall of Fame members, Nick Faldo, Colin Montgomerie and Jose Maria Olazabal. Canada’s Stephen Ames and Rod Spittle will be scrapping to become the first Canadians to etch their name on the Shaw Charity Classic trophy.

It will be no easy task with nearly all of the top-30 players on the Charles Schwab Cup Money List, including Miguel Angel Jimenez, booking their team times on Labour Day weekend.

For more information on the Shaw Charity Classic click here.