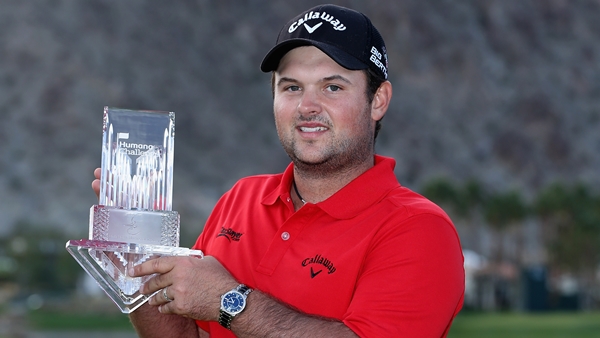 LA QUINTA, Calif.  – Patrick Reed found his putting touch right when things started to getting interesting in the final round of the Humana Challenge.

After shooting three straight 9-under 63s to open a seven-stroke lead, Reed had a 1-under 71 on Sunday at PGA West’s to beat Ryan Palmer by two strokes.

Finally resembling the guy who talked Saturday about being in a “putting coma,” Reed ran in an 18-footer for birdie on the par-3 15th to push his advantage to three strokes and parred the final three holes.

“It felt comfortable. It felt great,” Reed said. “I was able it play the last three holes just for par rather than trying to make birdies or trying to make something happen.”

He finished at 28-under 260 in the three-course event that he opened and closed on PGA West’s Arnold Palmer Private Course.

The 23-year-old Reed has two victories in his first 46 PGA Tour starts, winning the Wyndham Championship in August. He was projected to jump from 73rd to 42nd in the world ranking, enough to lock up a spot in the 64-man Match Play Championship.

Reed took a call from former President Bill Clinton – the tournament is run in partnership with the Clinton Foundation – during his interview session.

“He told me to get myself back in that zone more often,” said Reed, who met Clinton earlier on the driving range. “Because he said it was a lot of fun to watch.”

Palmer made a 15-foot eagle putt on the final hole for a 63.

“What can you do with what Patrick did this week?” Palmer said. “It’s ridiculous what he did. Amazing how good he played. We’ll come up a couple short, but it was a win in my game because I was playing for second today.”

Zach Johnson and Justin Leonard tied for third at 25 under. Johnson birdied the final five holes for a 62, the best round of the week.

“I got red hot at the end,” Johnson said.

The Kapalua winner is taking a four-week break. He’ll return for the Match Play event.

“Hopefully, I can maintain where I’m at,” Johnson said.

Leonard parred his last two for a 65.

“Would love to have made a few more putts,” Leonard said.

Other than key 18-footer on No. 15, the longest putt Reed holed was a 5-footer for par on the par-4 13th. That was a crucial putt after he played the previous eight holes in 1 over with four bogeys and three birdies.

“I knew that if I didn’t make that putt, then it was going to get interesting,” Reed said. “To make that putt kind of gave me a little bit more fire saying, ‘All right, well, we’re running out of holes for people to make a lot of birdies.”’

In that eight-hole stretch, Reed missed two 6-foot par putts and an 8-footer and dropped another stroke with a poor bunker shot on the par-3 12th.

“It would either come and just stop just short, or it would break at the very end and break off the planet and lip out,” Reed said. “It seemed like nothing would go in.”

On Saturday, Reed broke the PGA Tour record for relation to par for the first 54 holes, finishing at 27 under. He also became the first player in tour history to open with three rounds of 63 or better. On Sunday, he became the second player in the event to lead wire-to-wire, joining 1977 winner Rik Massengale.

“To have a day where I felt like I had probably about my C or D game and still shoot under par, and to close off a victory, that means a lot to me,” Reed said.

Reed’s wife, Justine, is pregnant with their first child, forcing her to turn over caddieing duties to her brother, Kessler Karain. She has walked every hole this year and plans to caddie again after the baby arrives around Memorial Day.

“I can’t wait to be a dad and have a little girl running around at the golf course and whenever I come home have her run up, hanging out with dad,” Reed said.

After helping Augusta State win NCAA titles in 2010 and 2011, Reed drew attention in 2012 when he successfully Monday-qualified for six events. He earned his tour card in December 2012, surviving six rounds of Q-school at PGA West.

“We have worked so hard at it,” Reed said. “Especially, with my wife and I, how hard we have worked the past 2 1/2 years, through Q-School, through the Monday qualifiers, and through here to get two wins in less than half a year.”

Brad Fritsch finished 14-under after shooting a 2-under 70 on Sunday. The Ottawa native tied for 48th.