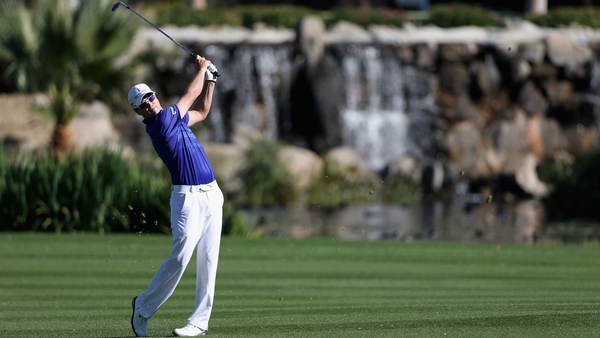 LA QUINTA, Calif. – Zach Johnson asked his short-iron approach on the par-4 18th to “Do something right, baby.” It did.

With just a hint of a draw, Johnson’s shot landed to the right of the right-side pin and spun to 2 feet to set up a birdie Thursday that left him two strokes behind first-round leader Patrick Reed in the Humana Challenge.

Thriving on great driving, even better wedge play and putting, Johnson has three worldwide wins in his last seven starts.

He began the run in the BMW Championship in September, and beat Tiger Woods in a playoff in December in the World Challenge after holing a wedge for par on the final hole of regulation. Johnson followed that with a victory two weeks ago in Kapalua.

“I don’t think I’m the best,” Johnson said when asked if he’s the best wedge player.

“He’s the first one that comes to my mind,” Johnson said. “Phenomenal wedge player. … But my wedges are clean. … I’ve worked on it a lot. I’ve worked on it in a number of different ways, but the main way is really just trying to dial in yardages and trajectories.”

Johnson finished with a 7-under 65, hitting all 14 fairways at La Quinta Country Club _ the most-demanding driving layout in the three-course event. He hit 15 of 18 greens in regulation and had 27 putts in his bogey-free round.

“The greens over there are, I don’t even know how to explain them, it’s like carpet,” Johnson said. “I mean, they’re just so good. I don’t know what they do over there, but they look artificial. They’re like this every year, but they’re as good as I’ve ever seen.”

Johnson has 11 PGA Tour victories. Dating to his rookie season in 2004, only Woods, Phil Mickelson and Vijay Singh have more.

“It means that I’m doing something right,” said Johnson, the top-ranked player in the field at No. 6.

Reed had a 9-under 63 in perfect scoring and weather conditions. He ran off five straight birdies in the middle of his bogey-free round on PGA West’s Arnold Palmer Private Course and tied his career low.

“The course is in perfect shape,” said Reed, the Wyndham Championship winner in August. “The rough isn’t very high, the fairways are perfect and the greens are rolling very true.”

“I started out a little struggling with the driver, had some lefts in it, but luckily I missed it in the right spots,” Reed said. “I was really confident with my irons, kept hitting greens and all of a sudden, 10-, 12-, 15-, 20-foot putts started going in.”

With wife Justine pregnant with their first child, her brother, Kessler Karain, is subbing as Reed’s caddie. Justine has walked every hole with her husband this year and plans to rejoin him inside the ropes after the baby girl arrives. The due date is Memorial Day.

Palmer birdied his final six holes and nine of his last 12 on the Palmer course, the site of the final round Sunday.

Hicks had an eagle, seven birdies and a bogey on the Jack Nicklaus Private Course.

“Just trying to give myself as many opportunities as I can,” Hicks said.

Hoffman, the 2007 winner, had an eagle and six birdies at La Quinta.

“I love this golf course,” Hoffman said. “I think this is probably one of the better tracks we play all year when it’s said and done.”

Summerhays birdied seven of his last 10 on the Nicklaus course.

“It’s fun to make birdies,” Summerhays said. “That’s one of the fun things about this tournament is that the courses are a little easier. They’re in perfect shape, which makes them almost even easier.”

With a high temperature in the mid-80s and only a gentle morning breeze off the Santa Rosa Mountains, the players averaged 69.692 on the Palmer course, 69.431 on the Nicklaus layout, and 70.192 at La Quinta.

Ottawa’s Brad Fritsch carded a 67 at the Palmer course. David Hearn of Brantford, Ont., also on Palmer, had a 68. Calgary’s Stephen Ames and Mike Weir of Brights Grove, Ont., each shot a 73 on the Palmer course.

Keegan Bradley opened with a 69 at La Quinta in his first start of the year. He’s fighting a cold and struggled with his distance control and accuracy.

“I’m still a little tired. Getting better every day,” said Bradley, paired with Johnson the first three days. “I’m happy with today’s round for the first round of the year.”

Defending champion Brian Gay also had a 69 at La Quinta.