Patrick Reed still the talk of the Presidents Cup 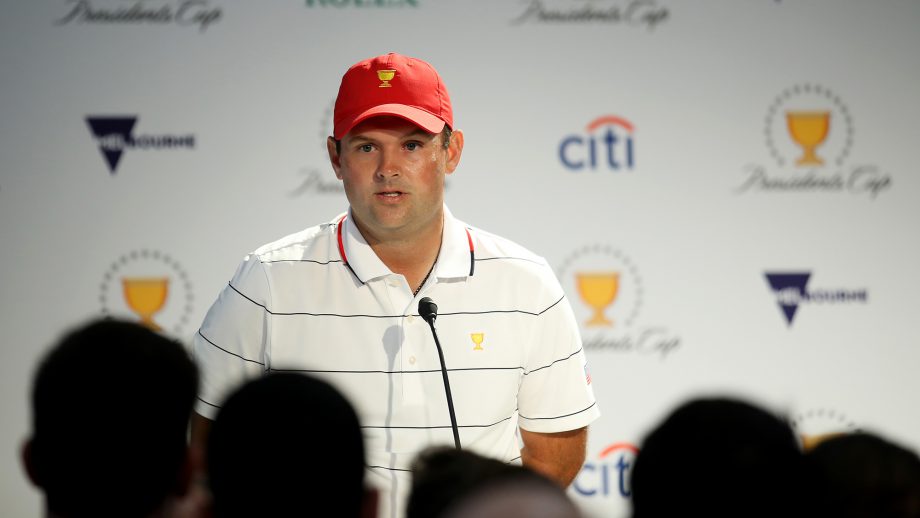 MELBOURNE, Australia – As if being the first playing captain in 25 years at the Presidents Cup weren’t enough, Tiger Woods filled yet another role Tuesday at Royal Melbourne.

This wasn’t necessarily by design.

Woods had Patrick Reed in his group for the first full practice round for a U.S. team still trying to shake off the jet lag from a 23-hour flight from the Bahamas.

“It’s always great playing with Tiger because he kind of frees you up,” Reed said. “Everyone’s focused on what Tiger’s doing.”

Woods got plenty of love from the fans, many fearing they might never get a chance to see him Down Under after his career was in jeopardy from four back surgeries. Woods won the Australian Masters at nearby Kingston Heath in 2009 and made the clinching putt in 2011 the last time the Presidents Cup was at Royal Melbourne.

Not that Reed was ignored.

He was the biggest topic on the first day of interviews because of his rules violation last week at the Hero World Challenge when he twice scooped away sand behind his ball while playing from a waste area. Reed was penalized two shots after seeing the video. He says it wasn’t intentional and he wasn’t helped; he didn’t feel or see his club scrape back the sand; and the camera angle didn’t show his club far enough behind the ball.

Fans didn’t wait until the start of the matches Thursday to needle him.

Reed played in a foursome with Woods, Justin Thomas and Patrick Cantlay. As he prepared to tee off, a fan in the bleachers said, “Now on the tee, The Excavator.”

Reed turned toward the fan and tipped his cap, then drilled his iron down the fairway.

Eleven of the 15 players and captains who were available for interviews Tuesday were asked about Reed. That included Reed, and one of the questions directed to him was, “You didn’t cheat?”

A closer look at Patrick Reed’s two-stroke penalty during Round 3 of the Hero World Challenge. pic.twitter.com/z2aqkajnYq

“No, of course not,” Reed replied.

He stood patiently before the largest group of media, answering every question about what happened, whether it bothers him to hear the word “cheat” bandied about or if he even cares what people think of him.

Reed just wants to get on with the Presidents Cup, and his teammates felt the same way.

“That’s something that’s great about Patrick is he’s been a great team player and he’s always wanted to win points for the team,” Justin Thomas said. “So I think the only way it could become a distraction is what the headlines are and how much we read into it. We’re not here to read articles and get into this or that. We are here to try to win points for the U.S. team in the Presidents Cup. … It’s in the past. And I understand it’s going to be something that continues to get brought up, but none of us worry about it.”

He was in the bunker on one hole, stood up to the shot and purposely took two practice swings that swiped away sand, then stood there laughing before dropping the ball elsewhere.

“It’s all in good fun,” Thomas said. “We needle each other all the time but it’s never anything personal.”

Still to be determined is whether it becomes personal to anyone else, inside or outside the ropes.

Marc Leishman was outspoken last week after seeing the Reed violation on television from the Australian Open. Asked about it again Tuesday, he said, “I only saw what everyone else saw. I guess we’ve all made up our own minds about it.”

“I think we’re just going to let that one go and try and beat him on the course,” Leishman said. “I think we’ve said enough, or I’ve said enough about it. I don’t need to add any fuel to the fire. … We know we have to play well to beat the Americans, and that’s what we’re preparing for.”

This is a big year for the International team, led by Ernie Els. It has only one victory in the 25 years since the Presidents Cup was created to give players from outside Europe matches styled after the Ryder Cup. That was in 1998 at Royal Melbourne, the only other time the matches were held in December.

The underdog label, even for a home game, has never fit so well. The International team has seven rookies, with Adam Scott the highest-ranked player at No. 18. The average world ranking of the American team is 12.3.

“This week, this is probably the best chance we will have with this golf course, this crowd, and I think the way our guys are playing,” Louis Ooshtuizen said. “It’s no fun going out and everyone is saying, `They’re just going to run over them again.”’

Woods is required to play at least once before the 12 singles matches Sunday. He paired himself with Thomas for the opening round of the Bahamas, and it appears likely they will be partners, particularly with Cantlay and Reed having played together in the team event in New Orleans the last few years.

Or maybe he will play again with Reed, after having gone 0-2 at the Ryder Cup last year.

Either way, Woods is sure to draw a crowd.

“It doesn’t matter where you go in the world, I think people are going to root for him,” Thomas said.