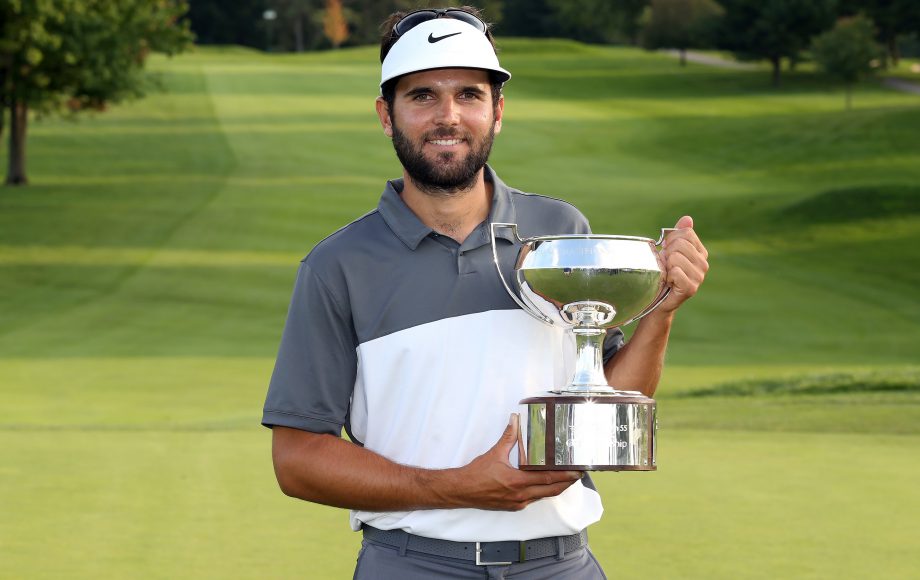 London, Ont. – A day removed from his career-low, 9-under 61 at Highland Country Club, France’s Paul Barjon posted a final-round 2-under 68 to win the Freedom 55 Financial Championship, the final event on the 2016 Mackenzie Tour – PGA TOUR Canada schedule by a stroke over French Polynesia’s Vaita Guillaume at 22-under 258, a Mackenzie Tour record for 72 holes.

With the win and a first-place check of $36,000, Barjon jumped from No. 30 to No. 6 in the final Order of Merit and will advance to the final stage of the Web.com Tour Qualifying Tournament.

Members of Dan Halldorson’s family presented Adam Cornelson with the Dan Halldorson Trophy as Player of the Year. pic.twitter.com/YYlZMTB4nB

Up by six strokes over 18- and 36-hole leader Aaron Wise after his eagle at the par-5 second hole, Barjon remained in the driver’s seat all day and never lost his lead, despite a 10-under 60 by Guillaume. Barjon offset three bogeys with four birdies and an eagle.

“Yesterday was like a round that came out of nowhere,” Barjon said of his 61 in round three. “Today was a little different, when you play with the lead. You have everybody trying to chase you, but I was able to suck it up until the end and it worked out well, even with a 60 by Vaita.”

Barjon’s victory marks his third top-10 finish of the season, bettering a pair of T6 showings at the Bayview Place DC Payments Open presented by Times Colonist and the ATB Financial Classic.

“This is absolutely one of the best golf courses we play all year,” Barjon said of Highland. “It was a good one for me, everything worked out for me and it turned out successful for me.”

Barjon’s nearest threat in the end proved to be Guillaume. Beginning the day nine strokes off the lead at 11-under-par, Guillaume birdied his last four holes en route to a 10-under 60, tying the course record at Highland set by Curtis Reed in 2015. The Campbell University grad finished just a stroke back at 21-under 259.

Wise, the NCAA 2016 individual champion with the Oregon Ducks, finished three shots shy at 19-under after shooting a final round 68.

“It’s a huge honour to be the top Canadian at this event,” Cockerill said. “There are so many great players from across Canada here this week, and the competition on this Tour is so strong. Thanks to Freedom 55 Financial for their support in helping players like me chase their dream of making it to the PGA TOUR.”