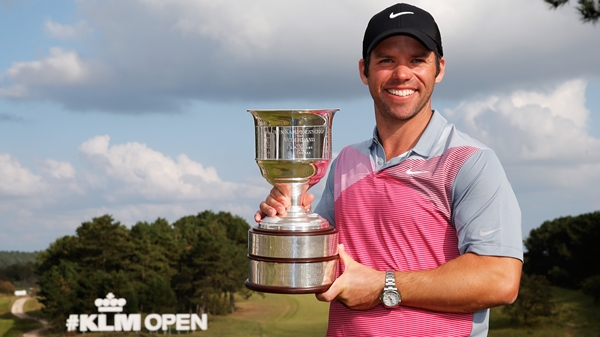 ZANDVOORT, Netherlands – New dad Paul Casey shot a four-under 66 Sunday to win the KLM Open at 14 under, a single shot ahead of fellow Englishman Simon Dyson.

Casey’s win came less than two weeks after his partner gave birth to their first son.

“First tournament as a dad and first win as a dad,” Casey said after his victory at the Kennemer Golf & Country Club.

Casey looked to be cruising to victory before recording his only bogey of the day at the par-three 15th. He followed that with a wild tee shot on the 16th but his second shot out of the rough landed wide and bounced onto the green, giving him two putts for par.

Dyson, looking for his fourth KLM Open title, birdied the 18th to move within a shot of the lead, but Casey comfortably closed out with pars on the 17th and 18th for his 13th European Tour title.

Andy Sullivan completed an all-English top three, thanks in part to a hole-in-one on the 15th which won him a 100,000-euro seat on a commercial flight into space offered by a sponsor.

Casey set up his win with a blistering 62 on Saturday, when he came within inches of the European Tour’s first ever 59. An eagle on his final hole, the par-four ninth, would have meant a 59 and his second shot narrowly missed the cup before spinning off the green and leading to a bogey.

Casey began Sunday’s round four shots behind overnight leader Romain Wattel, but the young Frenchman could only manage a 74 in his final round while Casey shot four birdies on the front nine followed by a birdy and bogey coming home.

“My game plan was to have as much fun as we could,” Casey said. “We tried to concentrate on every single shot, but relax and be aggressive if we could.”