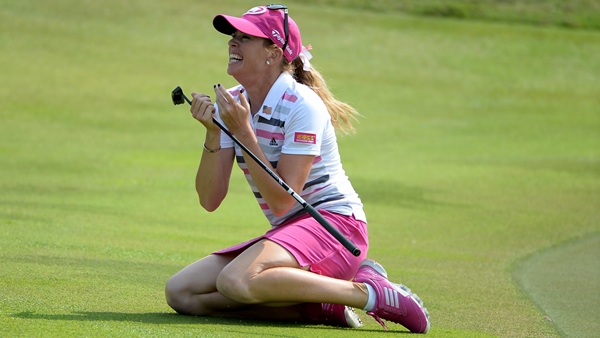 SINGAPORE – Paula Creamer sank a 75-foot eagle putt on the second playoff hole against Azahara Munoz to win the HSBC Women’s Champions on Sunday for her first LPGA title since the 2010 U.S. Women’s Open.

Creamer’s putt curled across the 18th green and then rolled slowly down the slope and directly into the hole. She ran across the green, then fell to her knees and put her head on the ground, laughing and pounding the grass.

“It’s one of those putts where if you just get it in the right spot, it’s going to fall down,” she said. “But I could stand there all day long and putt that and I don’t think get it within six, seven feet.”

Creamer and Munoz finished 72 holes tied at 10-under 278, one stroke ahead of Karrie Webb, who led after every round but bogeyed three of her last six holes to give up a three-shot lead and finish third.

Creamer captured eight titles early in her career before getting her breakthrough win at a major at the U.S. Women’s Open.

After that title, though, Creamer found it tough to win again. She came close on a number of occasions, only to fall short every time.

Two years ago, she lost an LPGA record nine-hole playoff against Jiyai Shin at the Kingsmill Championship. She was also third here in Singapore last year and finished in a tie for third twice to start this season.

“I just was struggling. I was enjoying what I was doing, but I wasn’t loving it,” she said. “My expectations were way too high.”

In December, Creamer got engaged to Derek Heath, which she said put some of her past difficulties in perspective. Then came Sunday’s victory against one of the toughest fields outside the majors, featuring 19 of the top 20 ranked players.

“It might be one of my favourite wins. … It’s been almost three years and so much has happened,” she said. “Holding that trophy, gosh, it was so nice.”

For much of the day, it appeared as if Webb, not Creamer, would take the trophy home. But after avoiding trouble on a tricky Serapong course at Sentosa Golf Club for much of the week, the veteran Australian stumbled late.

First, Webb’s three-foot par putt on the 13th caught the edge of the hole and curled away. Then she hooked her tee shot left on the 15th, grimacing as it dropped into the water. She settled for bogey on both.

She came undone on the 18th when another errant tee shot ended up in a bunker. She took a big swing at the ball and it hit the lip of the bunker, plopping back down into the sand to lead to another bogey.

“I’m a bit in my head right now,” Webb said after the round. “Just not a lot of good decisions.”

Creamer and Munoz, meanwhile, were steady in the closing holes.

Creamer, who trailed Webb by four strokes at the start of the day, made a difficult 12-footer for birdie on the 15th to pull even with Webb at 10 under. Then, after hitting into the bunker herself on No. 18, she recovered to save par and headed to the clubhouse to wait for Munoz to finish.

The Spaniard, who had trailed by five strokes early in the round, came out of nowhere to join the leaders by sinking a 12-foot birdie putt on the 17th. She had a chance to win it on the 18th but pulled her birdie putt wide.

Webb wasn’t the only one who had a disappointing day. Defending champion Stacy Lewis saw her streak of 13 consecutive top-10 finishes broken with her joint-40th place. She had been closing in on Webb’s LPGA record of 16 straight top-10 finishes, set in 1998-99.

“I played terrible all week,” she said. “I didn’t hit the ball well or make any putts.”

World No. 1 Inbee Park shot a 68 to finish in joint fourth place at 7-under 281 with No. 2 Suzann Pettersen, So Yeon Ryu, Angela Stanford and Morgan Pressel.

Michelle Wie and Teresa Lu were two strokes back in a tie for ninth.