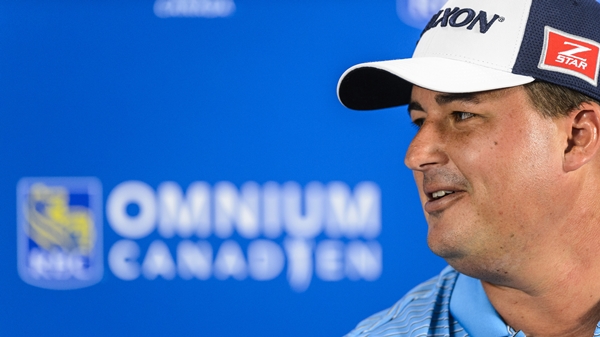 MONTREAL – Michael Putnam and Tim Petrovic mastered the afternoon winds to shoot six-under-par 64s and take a share of the first-round lead at the US$5.7 million RBC Canadian Open on Thursday.

But the surprise of the day was big-hitting amateur Taylor Pendrith of Richmond Hill, Ont., who shot five-under 65 for a share of third place with Kyle Stanley.

Putnam and Petrovic played bogey-free golf at the 7,153-yard par-70 Blue Course at Royal Montreal on a near perfect day for scoring, with sunny weather and soft greens from heavy rains the previous day.

A gust wind came in for the those with afternoon starts, but it didn’t stop Putnam or Petrovic from shooting the low scores of the day, which set the course record for an opening round.

“It was tough ball-striking, but somehow I was able to keep it in the fairway and take advantage of the soft greens to hit a couple of shots close and make a couple of five-to-ten-foot putts,” said Putnam, who has been playing his best golf of the season of late with top-35 finishes in his last three outings.

The 47-year-old Petrovic didn’t know he would play until he got a call on Tuesday saying he was in as the seventh alternate. The former PGA Tour regular, playing only his eighth Tour event this season, didn’t even have his name on the program.

There was no rust in his game, however.

“I didn’t set my expectations high because I got in late, so this was kind of my practice round,” said Petrovic. “I walked the back nine (Wednesday).

“It wasn’t that I played conservative. I was just trying to hit fairways and greens, trying to see the golf course and see if I could make a few putts. I drove the ball pretty good overall.”

There were 11 players tied at 4-under 66, including Nick Watney and Charl Schwartzel, and another 16 at 3-under 67, including David Hearn of Brantford, Ont., and two-time Canadian Open champion Jim Furyk.

Another dozen were at 2-under 68 and there were 23 at 1-under 69, including top-ranked Canadian Graham DeLaet of Weyburn, Sask., and defending champion Brandt Snedeker.

Another sunny day is forecast for the second round on Friday, with a possibility of wet weather on the weekend.

The 23-year-old Pendrith, Canada’s top amateur, had a dream day in his first round of his first Canadian Open. He recently graduated from Kent State University and hopes to play in the world amateur championships this summer before likely turning pro in the fall.

Although it’s early, he’s one stroke off the lead of a tournament no Canadian has won since Pat Fletcher in 1954.

“I never expected that,” said Pendrith. “I was playing good golf coming in here, so I just played golf.

“Five-under is pretty nice. Everybody has some nerves. If you didn’t have nerves on the first tee something would be wrong with you. But after I played the first hole, I felt calm and felt I should be here.”

“The front nine suits my game a lot,” he said. “I can shoot driver nearly every hole.

“I had four birdies on the front nine, all with wedges.”

Pendrith is 18th in world amateur rankings, tops among Canadians. He and fellow national team members Adam Svensson of Surrey, B.C., who shot even-par 70, and Corey Conners of Listowel, Ont., who was at 4-over 74, were given entries into the Open.

Stanley’s 5-under was the best among the early tee times.

“I love this golf course,” the Gig Harbor, Wash., native said. “It’s similar to the one I grew up with in Washington, so I felt pretty comfortable.

“I hit the ball well on my first nine today. I was able to make a few of the long range putts that got the round going for me.”

The soft greens made for ideal scoring conditions, but Stanley said the course is still a challenge.

“That front nine is pretty difficult,” he said. “There’s a couple of mid-irons into the par-3s and a 500-yard par-4 (the fourth), so it’s a kind of sneaky-demanding course.”

Stanley is best known for posting his only PGA Tour win a week after a memorable collapse.

In 2012, he blew a six-shot lead in the final round of the Farmers Insurance Open and lost in a playoff to Snedeker, then bounced back with a victory at the Phoenix Open.

This season has been trying for the 26-year-old. He sits 164th in FedEx Cup standings with only one top-25 finish, which was in October.

He said it was premature to think about turning the season around after one good round.

“There’s a ton of golf left,” he said. “It’s nice to get a round like this because it shows I’m working on the right things.”

Hearn had a great round going until he bogeyed the 14th and 15th on his back nine. He recovered with a birdie at the 16th.

“Any day you come off the course and shoot 3-under and feel you left a few out there, you feel it’s a good day,” said Hearn. “I’m not overly disappointed with the way I played.

“I hit the ball great from tee to green. If I can continue to do that for the rest of the week I know I’m going to play well.”

It was a rough opening round for some. Both Stephen Ames of Calgary and one of the tournament favourites, Dustin Johnson, shot 4-over 74. John Daly had 6-over 76, Scott McCarron turned in a 78 and Erik Compton shot 79.