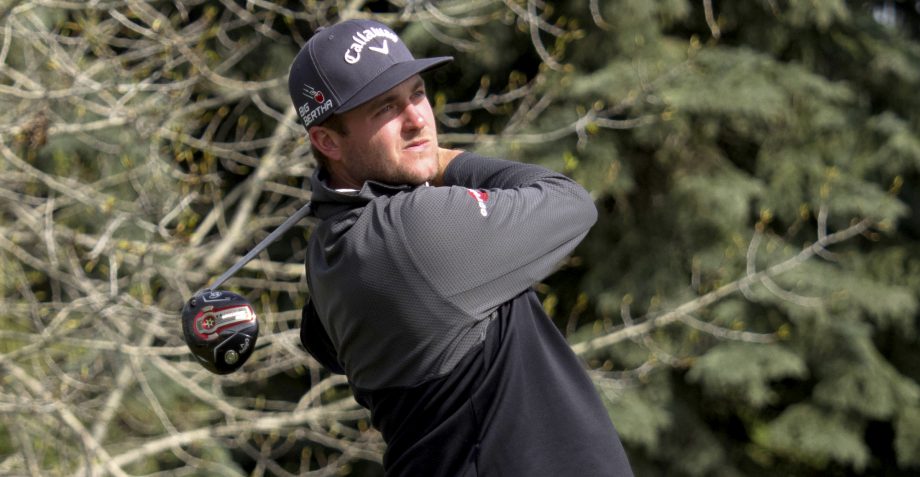 OTTAWA – Richmond Hill, Ontario’s Taylor Pendrith and Longwood, Florida’s Sam Ryder reached 15-under par through 54 holes at Hylands Golf Club on Saturday to share the lead heading into the final round of the Mackenzie Tour – PGA TOUR Canada’s National Capital Open to Support Our Troops.

The 24-year old Pendrith held a two stroke lead playing the 18th hole before finding the water with his approach and making double bogey, leaving him in a tie with Ryder with one round to go at Hylands.

Uniontown, Ohio’s Ross Beal and Otsego, Minnesota’s Clayton Rask, who holed his 82-yard approach on the 18thfor eagle, were one shot back at 14-under in a tie for third.

“I played solid, hit the ball really well and made a lot of putts, so I can’t be too disappointed. It would have been nice to hit it in the fairway on 18 and a make a par, but that’s alright. It’s nothing that can’t be fixed tomorrow,” said Pendrith, a member of Golf Canada’s Young Pro Squad.

“I played well all day and had a nice little stretch on 13 through 16. I was hitting it in the fairway and my irons were pretty good today,” said Ryder, a second year Mackenzie Tour player who sits 11th on the Order of Merit. The Stetson University grad shot a 7-under 64, including four straight birdies on the back nine.

Pendrith began the day playing in the final group with Beal, the 36-hole leader, with the pair of long bombers ranking among the longest hitters on Tour. Pendrith said the back-and-forth battle off the tee spurred both competitors on Saturday afternoon.

“It was fun. We both hit it really far and we were both swinging very hard on almost every tee ball. He made five or six birdies and an eagle and I made nine birdies, so it was a lot of fun,” said Pendrith, a graduate of Kent State University.

Ryder, meanwhile, played with current Mackenzie Tour Order of Merit leader J.J. Spaun, who shot his third straight 4-under 67 to sit tied for fifth. Ryder said the amicable atmosphere in their pairing was the perfect tone-setter for his round of 64, which included four straight birdies on the back nine on holes

“We had a good time. J.J.’s a buddy of mine. We talked before the round and said ‘Let’s go out here and get it, feed off each other a little.’ It’s nice when you both can start making some birdies and get it going, it definitely helps you and gets the juices going,” said Ryder.

Three shots back of the lead were Spaun and Zimbabwe’s Nyasha Mauchaza at 12-under. 12 players were within five shots of the lead at 10-under or better heading into Sunday.

82: Clayton Rask’s yardage to the hole on his second shot at the par-4 18th, which he holed for eagle.

“Last year was my first year out here and this year has been steady. I’ve put myself in some good positions. Hitting the shots under the most intense pressure you can get out here. It’s just about being patient and waiting for your time, and when it comes, it comes.” – Sam Ryder on the value of a year’s experience on the Mackenzie Tour.

“I was five yards short of the green and he was like seven yards short. It was a good way to start the day and keep the crowd in it. I saw him swing and he went at it, so I couldn’t let him hit it by me.” – Taylor Pendrith on he and Ross Beal’s drives on the 365-yard first hole.

“I hit it good. It was funny, [Rask and caddie Don Constable] just got done saying ‘how fun would it be to hole out?’ and sure enough it happened. It’s just ironic. For all the good putts that I hit today that lipped out, some good wedge shots that didn’t do it that I thought would, to hit one and it actually do exactly what we wanted it to do, it’s exciting.” – Clayton Rask on his hole out from the fairway on 18.