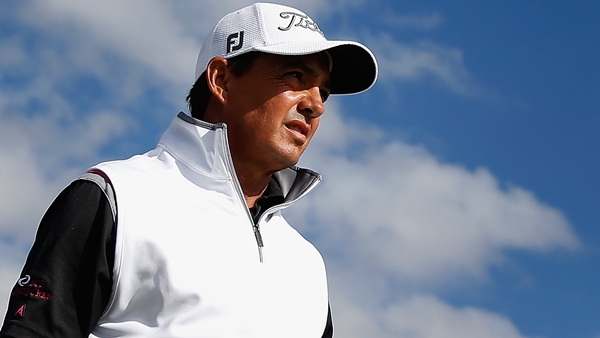 BOCA RATON, Fla. – Tom Pernice Jr. closed with a double bogey for a 6-under 66 and a share of the first-round lead Friday in the Allianz Championship with Paul Goydos and Bart Bryant.

Pernice, second behind Rocco Mediate two years ago at Broken Sound, hooked his drive into the water on the par-4 ninth. After a drop, he hit a 3-wood short of the green and missed a 9-foot putt. The 429-yard ninth was the most difficult hole Friday, playing to an average of 4.642 in windy conditions.

“It’s one of those things where you have to step up and hit a shot, and I wasn’t able to pull it off,” said Pernice, a two-time winner last year on the Champions Tour. “Not much you can do about it.”

Bryant, playing alongside Pernice, had four birdies and an eagle as he tries to win for the second time on the Champions Tour. Goydos, a winner last year in his first season on the 50-and-over tour, had seven birdies and a bogey and saved par a half-dozen times.

Bernhard Langer was a stroke back along with Fred Funk and Tom Byrum, who got into the field as an alternate. Langer, the reigning player of the year, won the 2010 event and has three other top-three finishes at Broken Sound in the last six years. He lives 15 minutes from the course.

Peter Jacobson chipped in for eagle at the 18th hole for a 68. He was tied with Brad Bryant (Bart’s brother), Grant Waite, Mark Brooks, Loren Roberts and Roger Chapman. Waite is returning to competition after spending the last six years as an instructor to several PGA Tour players.

Canada’s Rod Spittle had a 69.

Defending champion Michael Allen had a 70, 10 shots higher than his opening round last year.

Nolan Henke had a 77 in his Champions Tour debut. The three-time PGA Tour winner turned 50 in November.