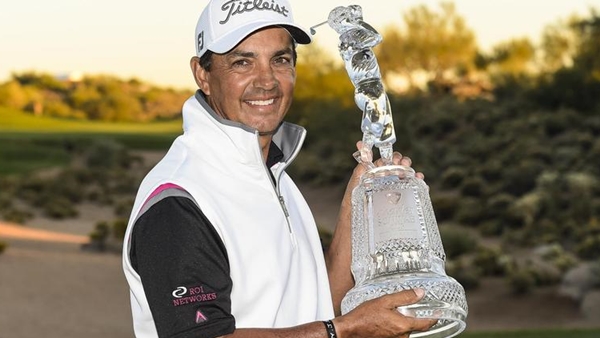 The 55-year-old Pernice got up-and-down from the left bunker on the par-5 18th, holing a 6-foot putt after Haas made a 12-footer for par.

“I just said, `He’s going to make it, so you need to be prepared to play it on the right edge. And it rolled right in,” Pernice said. “It was pretty scrappy. I hung in there. Short game is part of it as well and my short game held up and carried me through.”

“Jay and I have become good friends,” Pernice said. “I’ve gone back and played in his charity event in Greenville. I hate for anybody to lose.”

Pernice earned $440,000 in the event limited to the top 30 on the money list. He also won a playoff in Iowa in June and has four career victories on the 50-and-over tour after winning twice on the PGA Tour.

“I was just thinking last night, it’s such a privilege to be able to be out here, first and foremost, to be out here playing with Freddie Couples and Jay Haas and Kenny Perry and Bernhard Langer and Hale Irwin and Tom Watson,” Pernice said. “To be able to do that and compete and do what we do at our age is pretty amazing that this is here for us.”

Haas had birdie chances to win on the second and third playoff holes, but missed both to the right.

“It was a long day, longer for the team that loses in extra innings,” Haas said. “Tom’s such a beautiful bunker player and pitcher of the ball and everything. I knew I was going to have to make a birdie to beat him.”

On the third on the par-3 17th, Haas missed a 15-foot birdie putt. Pernice made a 6-footer after missing the green to the left and hitting a flop shot.

On 18 on the second extra hole, Haas’ 8-foot birdie also slid right, and Pernice made a 4-footer for a scrambling par. He drove right into a narrow wash channel in the desert, slashed backward to the fairway, hit his 246-yard approach to the right of the green and set up the par putt with a long pitch.

“Just hit a bad drive,” Pernice said. “I had been aiming down the left side and kind of cutting with the wind and came up and out of it and blocked it and so the wind got it. …. Luckily, I had a shot, but I had to go backwards quite a ways because I was going in the direction of the washout.”

Haas made a 6-foot birdie putt on 18 on the first extra hole after Pernice’s two-putt birdie.

In regulation on 18, Haas holed a 35-foot birdie putt from the fringe to take the lead at 11 under. Pernice – playing a group behind – forced the playoff with his 6-foot birdie putt.

Haas opened with rounds of 66 and 62 to take a four-stroke lead and break the tour record for consecutive rounds of par or better at 38, then shot 75 on Saturday to fall a stroke behind Pernice and Perry.

Haas won two weeks ago in North Carolina to become the 18th player to win a Champions Tour event at 60 or older. He has 17 Champions Tour victories after winning nine PGA Tour titles.

“It’s been a wonderful year and, you know, just a shot here or there,” Haas said. “Yesterday just was pretty awful, but today came back on a pretty tough day to have a chance there.”

Perry eagled the final hole for a 68 to finish a stroke back.

Langer closed with a 65 to tie for fourth with Colin Montgomerie at 9 under.

The 57-year-old Langer topped the money list for the sixth time in seven years. He led the tour with five victories, two of them majors, and had 12 top-three finishes in 20 starts. He also won the season points title and $1 million annuity in 2010.

“It’s still mind-boggling just to reflect on my year,” Langer said. “When you think about it, you play golf from January until now, it’s 10 months, and to have played as consistently well as I’ve done in 20 tournaments is hard to believe really.”

Montgomerie finished with a 67.