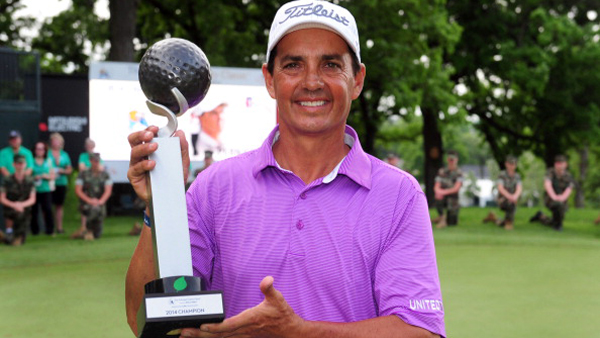 DES MOINES, Iowa (AP) — For the second time in less than a year, Tom Pernice Jr. hit a crucial shot on the 17th hole on his way to a victory.

This time, Pernice needed one more big shot to secure the win.

Pernice birdied the second hole of a sudden-death playoff with Doug Garwood on Sunday to win the Champions Tour’s Principal Charity Classic.

“I was calm all day. I played it with the right edge and I stroked it and it went right in the hole,” Pernice said.

Pernice won for the third time on the 50-and-over tour, closing with a 3-under 69 to match Garwood at 12-under 204 at Wakonda Club.

Garwood, making only his fourth start of the season, birdied the final two holes of regulation for a 71.

They played the par-4 18th hole twice in the playoff. Pernice won with a putt from roughly 8 feet after they opened the playoff with matching pars.

Pernice’s performance was reminiscent of the 3M Championship last August in Minnesota, when he made a 45-foot putt on No. 17 to win.

He chipped in from roughly 30 feet out to take the lead on Sunday, though Garwood matched that birdie and later forced a playoff.

“I really hit the ball good all week and really kept the ball in play in the fairway when I needed to and holed some key shots at key times,” Pernice said.

Garwood opened the final round with a one-shot lead but needing to win to earn a full Champions Tour card for the next 12 months. A birdie putt from the fringe on the first hole seemed to portend well for his prospects.

But Garwood bogeyed three consecutive holes – after going par or better on the first 41 holes of the tournament – and went into the back nine tied for first.

Garwood’s fourth bogey of the round, on the par-5 13th hole, appeared to ruin his shot for a career-defining win. But Garwood rallied with clutch birdies on the last two holes to stay alive.

Those shots helped Garwood redeem himself for three-putting the final hole of a qualifying tournament with a full exemption at stake in the offseason.

Garwood’s troubles made for a crowded leaderboard for much of the day.

Glasson began Sunday eight shots off the lead. But he jumped atop the leaderboard with the best round of the tournament and sat around for over two hours waiting to see if he’d end up in a playoff.

Haas, a three-time winner of the event, joined him in the clubhouse at 11 under with a birdie on No. 18. Allen also nearly qualified for the playoff before missing a birdie putt on No. 18.

Garwood then sent his approach on the final hole over the green, while Pernice stuck his close enough for a relatively easy winner.

“This is a great course. I love it. It’s an old classic course,” Pernice said. “I liked it from the get-go and I’m very happy with how it turned out.”

Jim Rutledge shot 72 in all three rounds to end the tournament among the group tied for 50th.