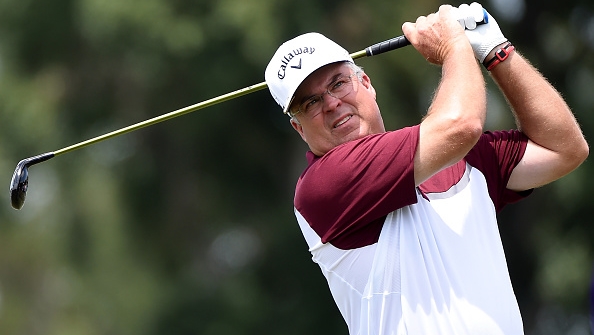 CARY, N.C. – Kenny Perry shot a 4-under 68 in the rain Saturday to take a one-stroke lead after two rounds in the Champions Tour’s SAS Championship.

Perry had an 8-under 136 total at Prestonwood Country Club. Joe Durant was second after a 68, and first-round leader Bernhard Langer (73) was another stroke back along with Lee Janzen (68).

“It really rained on us out there,” Perry said. “It was a battle. I didn’t have a lot of feel in my hands coming down the stretch, but I hit nice shots and the ball seemed to get around, and I got it in the hole.”

Perry, the 2011 winner at Prestonwood, won the 3M Championship in August in Minnesota for his eighth victory on the 50-and-over tour.

“It was tough, just hard hitting the ball solidly, fighting your grip and everything,” Durant said. “But I putted beautifully today, and that’s why I played so well because my putter was hot.”

Jeff Maggert made the biggest move. The Charles Schwab Cup co-leader shot a 67 to reach 4 under.

Colin Montgomerie, tied with Maggert in the season-long points race, was 2 under after a 72. Langer is third in the Schwab Cup race.

Janzen said he battled all day to keep dry.

“Hopefully, the sun will come out, it will dry up a little bit, and you’ll see some fireworks out there, guys going after it,” Perry said. “You could actually see some really good scores, so I’m going to have to go low again. I’m going to have to shoot a good round because it never fails, somebody on this tour always plays well on Sunday.”

Canada’s Stephen Ames is tied for 26th at 1-under.