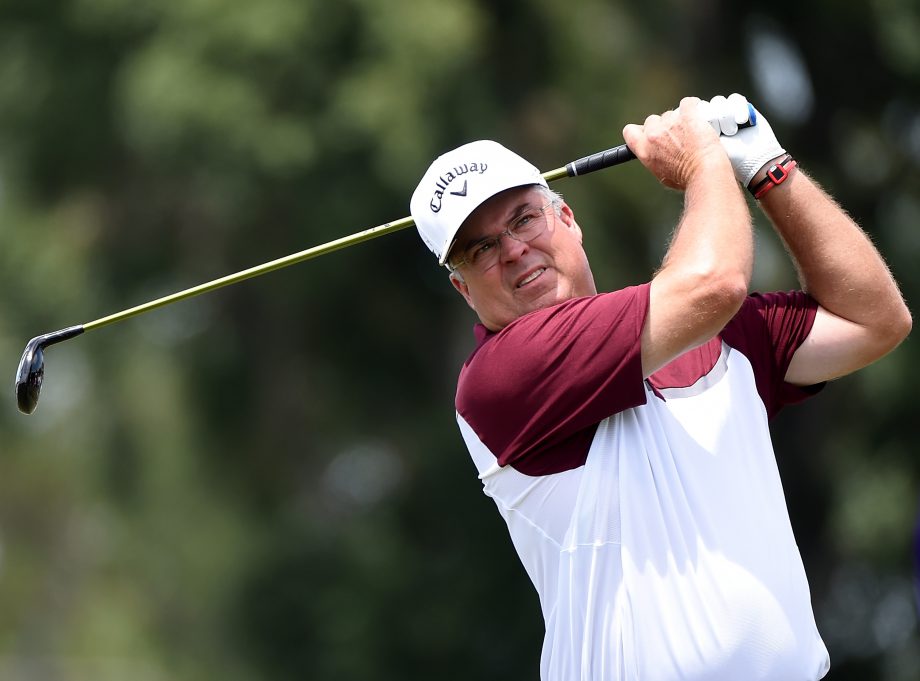 BLAINE, Minn. – Thoughts of a 59 crept into Kenny Perry’s mind early in his record-tying round Saturday in the Champions Tour’s 3M Championship.

The defending champion didn’t get that low, but had a hole-in-one and matched the tournament record with an 11-under 61 to take a four-stroke lead into the final round.

Perry has a 14-under 130 total at the TPC Twin Cities. His last 61 came at the Travelers Championship in June 2009 in the last of his 14 PGA Tour victories.

“I thought I needed a low round to get back in the tournament,” said Perry, who began the day five behind Minnesota native Tom Lehman.

Kevin Sutherland and Scott Dunlap are tied for second. Sutherland had a 65, and Dunlap shot 67.

Lehman followed his opening 64 with a 71 to drop into a tie for fourth at 9 under with Bernhard Langer and Marco Dawson. Langer and Dawson each shot 67. Langer won the event in 2009 and 2012 and has two second-place finishes in his previous six appearances. Dawson won the Senior British Open last week in England.

Perry played the first eight holes in 7 under, making an ace on the 188-yard fourth hole, had two birdies on the back nine and closed with an 18-foot eagle putt on the par-5 18th.

“To start out 5 under through four, I had an idea it might be a special day,” Perry said. “I started thinking, `You know what, what is it like to shoot a 59?'”

Perry, who once shot 59 on a par-70 municipal course in a mini-tour event in Nashville, needed just 23 putts.

“That was kind of the story of the day. I had great touch and feel,” he said.

Perry made a 15-foot birdie putt on final hole to beat Langer by a stroke last year, finishing at 23 under. Since the 3M Championship began in 1993, no player has repeated as champion.

Seeking his first win in 24 career Champions Tour starts, Sutherland birdied the first five holes and shot a front-nine 30, but had just one birdie on the back nine when he couldn’t make key putts, including a three-putt on No. 18.

“I’m a little disappointed at the end of the day,” said Sutherland, who shot the tour’s first 59 last August at the Dick’s Sporting Goods Open. “You know that Kenny is kind of running away from you, so you know you have to make some coming in to close the gap a little bit. I wasn’t able to do that.”

Lehman birdied three straight holes early in his round to maintain a three-stroke lead at 11-under, but he tweaked his back on a bunker shot while bogeying the short par-4 seventh and had a double bogey on the par-3 eighth. He recorded par on nine straight holes, until a birdie on the final hole.

“It’s hard to get any kind of rhythm, hard to hit the ball solid,” Lehman said. “I had a hard time bending over to putt.”

The wind that wreaked havoc Friday was absent Saturday, allowing players to be bold and aim for the pins. Saturday’s average score was 69.11; Friday it was 71.99. The wind is expected to increase just a bit for Sunday’s final round.

Larry Nelson shot a 66, bettering his age by one stroke.