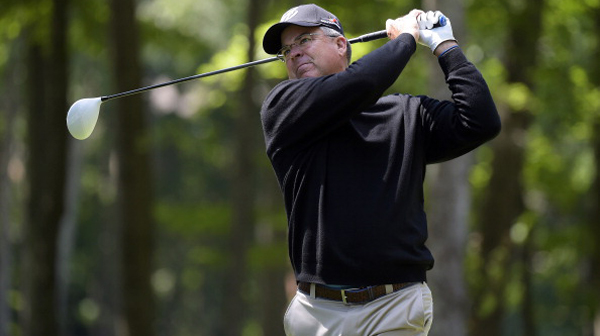 BIRMINGHAM, Ala. – Kenny Perry’s driver is sailing long and true again, just like the one he used to win two major championships last year.

Perry shot a 3-under 69 on Saturday at Shoal Creek to take a one-stroke lead over John Inman after the third round of the Regions Tradition.

Perry switched drivers after his first-round 72. The one he used to win both majors last year was destroyed on a flight from New York to Seattle for the Boeing Classic last August when the airline “killed it.”

“I’ve struggled ever since,” Perry said. “I did win the AT&T at the end of last year to hang on and win the Charles Schwab Cup, but I didn’t really play great and I haven’t played very well this year either.

“I’ve been fighting driver woes so hopefully this is a turn in the right direction and this driver’s going to solve my problems.”

Perry had a 7-under 209 total. He had four birdies and bogeyed No. 16, savoring the warm, sunny weather after two rounds in cooler temperatures and playing “very consistent, very solid golf.”

Inman, a two-time PGA Tour winner who coached at the University of North Carolina, shot a 66 after two even-par rounds. He had seven birdies before his first slip-up, a bogey on No. 16.

“I just hit a lot of solid shots,” Inman said. “I didn’t drive the ball as well as I would have liked, but when I drove it in the rough, I just hit some miraculous shots.”

Perry’s best finish on the tour this season was a fifth-place tie at the Toshiba Classic. The 54-hole leader has won only one of the last seven majors.

His only bogey on 16 came when his bunker shot went long and he missed the putt, but he bounced back with an 8-footer for par on the next hole.

A light rain had been replaced by sunshine by the time the leaders teed off, but for the third straight day they were allowed to lift, clean and place their golf balls.

“Still the scores are high,” Perry said. “Whenever you let a pro get his hands on it, the scores really tend to drop pretty low but this golf course is really beating us up with the swirling winds. We had South winds today. We played northwest winds the first two rounds.”

Calcavecchia began the round with a one-stroke lead over Haas, but both struggled.

Calcavecchia had a double bogey on No. 11 on his way to a 74. He lost a six-stroke Saturday lead in the 2011 Regions Tradition, largely thanks to a pair of double bogeys on 12.

“Two wrong clubs and a chunk wedge in the water on 11, that’s two bogeys and a double,” Calcavecchia said. “I actually hung in there pretty good for that.”

He said nagging rib problems plagued him for the third straight day, this time starting on the second hole.

Haas shot a 73 to snap the tour’s longest streak of par or better at 23 rounds. He had three straight bogeys starting on the second hole and didn’t have a birdie until No. 10.

The conditionally exempt Inman’s best finish in his first three tournaments of the year was a tie for 15th at the Allianz Championship in February.

He played in 14 events in 2013, mostly through the career victory category thanks to his PGA Tour wins, and didn’t finish better than ninth.

He’s the younger brother of former PGA Tour and Champions Tour winner Joe Inman. Only three sets of brothers have won on the Champions Tour – Bobby and Lanny Wadkins, Bart and Brad Bryant and Dave and Mike Hill.

The siblings both had successful Saturdays. Joe Inman coached Georgia State into its first NCAA championship since 2007 and his little brother followed with a big round.

“It feels good to get in because I’ve only played three events this year and I just need to play,” Inman said.