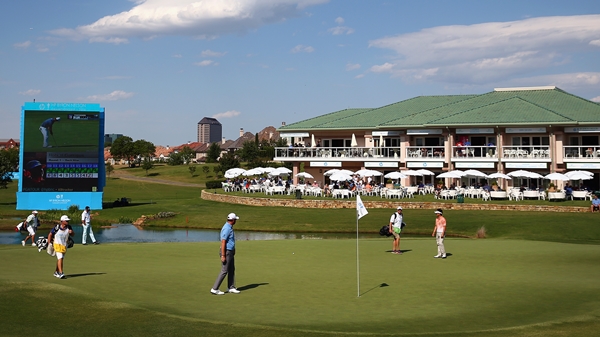 IRVING, Texas – Peter Hanson made his only back-nine birdie with a 6-foot putt at the 18th hole Thursday, closing out a 5-under 65 for a one-stroke lead over David Duval and two others after the first round of the Byron Nelson Championship.

Duval, ranked 890th in the world 15 years after being No. 1, birdied his last three holes – Nos. 7-9 – after pitching in from 57 feet for another birdie at the fifth hole.

The 42-year-old Duval almost withdrew before the round because of a muscle issue in his right elbow that made it painful to hit balls and practice this week. About a half-hour before teeing off, he still wasn’t sure that he was going to play because his arm was hurting again.

“I’m just glad I chose to tee off today, because I was seriously considering not,” Duval said.

Martin Kaymer, The Players Championship winner Sunday, was among eight players at 67.

Hanson made the turn at 5 under after shooting 30 on the front side. The Swede couldn’t keep up the pace on the back nine at TPC Four Seasons that he hadn’t played before Thursday because of travel issues and a sore back.

All six of Hanson’s birdie putts were inside 10 feet.

While Hanson, Duval and Wilkinson played afternoon rounds, Leishman was in one of the first groups out in the morning. He had a tap-in birdie putt at the par-3 second hole.

Leishman’s only bogey, at the 431-yard fourth hole after missing the green, was sandwiched by a pair of birdies. The Australian hit 13 of 14 fairways and 16 of 18 greens in regulation in a round he described as “fairly stress-free for the most part.”

It was Leishman’s best-scoring round since an opening 66 at Torrey Pines in January when he was the runner-up with his second consecutive top-five finish. In eight tournaments since, he missed three cuts and his only finish in the top 30 was a tie for 23th at The Players.

When Duval finished his round, he had a share of the lead – until Hanson sank his final putt. Hanson didn’t arrive in Texas until Tuesday after a canceled fight and has also been bothered by a sore back.

Duval hasn’t led the end of any round on the PGA Tour since the fourth of five rounds at Las Vegas in 2002. That was a year the last of his 13 PGA Tour wins at the 2001 British Open. He is playing his first Colonial since 2003 as a past champion on tour, a status that provides only limited playing opportunities.

After his bogey on his 12th hole, the 528-yard third hole, Duval was even par for his round. He had the long pitch on No. 5, and a similar shot from 43 feet at the par-5 seventh hole started his closing birdie stretch. He sank putts of 3 1/2 and 17 feet to finish.

Canada’s Graham DeLaet and Mike Weir opened with matching 2-under 68s and hold a share of 13th spot.

Stephen Ames was at even-par after his round Thursday. Brad Fritsch took 72 swings to get around TPC Four Seasons Resort.