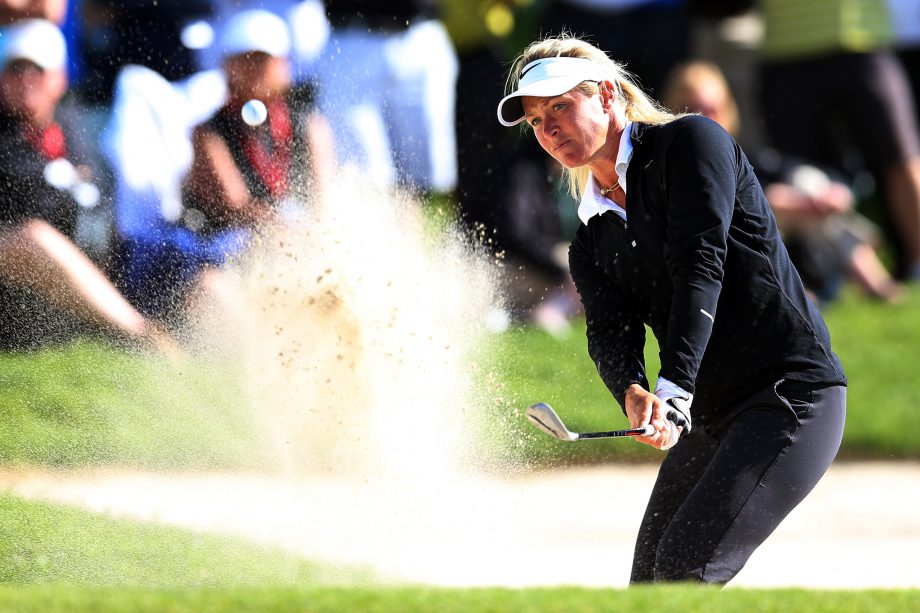 CAMBRIDGE, Ont. – Suzann Pettersen took a one-stroke lead Saturday in the Manulife LPGA Classic, making an eagle and four birdies on the first 11 holes and closing with seven pars for a 6-under 66.

Pettersen had a 19-under 197 total at Whistle Bear Golf Club. Bothered by a shoulder injury this season, the 34-year-old Norwegian player won the last of her 14 LPGA Tour titles in 2013.

“I can only look upwards, only I can set the pace,” Pettersen said. “Yeah, there’s a lot of people in the hunt for this and the course is playing great. I think it’s fun for the fans to see us shooting low scores and I’m excited to go back out there tomorrow and fight it to the very end.”

Colombia’s Mariajo Uribe was second after a 67.

“I’m a pretty aggressive player, so luckily I didn’t have to change my strategy here,” Uribe said. “I feel really confident right now, my driver’s pretty straight, so I like it.”

She won the tour’s unofficial HSBC Brazil Cup in 2011.

Cristie Kerr was third at 17 under, also after a 67. The American won the Kia Classic in California in March for her 17th LPGA Tour title.

“I think you can’t get too far back on a course like this,” Kerr said. “You’ve got to be able to stay within sight. Just got to play my own game and just start walking some putts in and put some pressure on the other people.”

Petersen birdied the first three holes, eagled the par-5 ninth and made another birdie on No. 11.

“I got off to a fantastic start,” Pettersen said. “Then, coming off 18, I don’t know if I felt like I played that well today. I kind of dried up a little bit towards the end. … Overall very happy, in a good position, but there’s a good job to be done tomorrow.”

“I just tried to stay patient, there’s so many options there to make birdie,” Uribe said. “I didn’t really start that well, birdie on No. 1, and then didn’t really make birdie til the end of the front nine, so just stayed patient there. I think of just my game.”

“That was a great birdie on the last hole,” Kerr said. “I think I jumped up in the air. I made a great putt on 16 and that was not an easy pin there, either. You know what, I was hitting so many good putts all day that nothing was dropping and I was getting a little frustrated. … I just got really determined down at the end there to make up a couple so I stay within reach tomorrow.”

Canadian Alena Sharp is currently T15 after a third round of 68. Natalie Gleadall carded a round of 70, while Sara-Maude Juneau and Sue Kim both shot a round of even par.