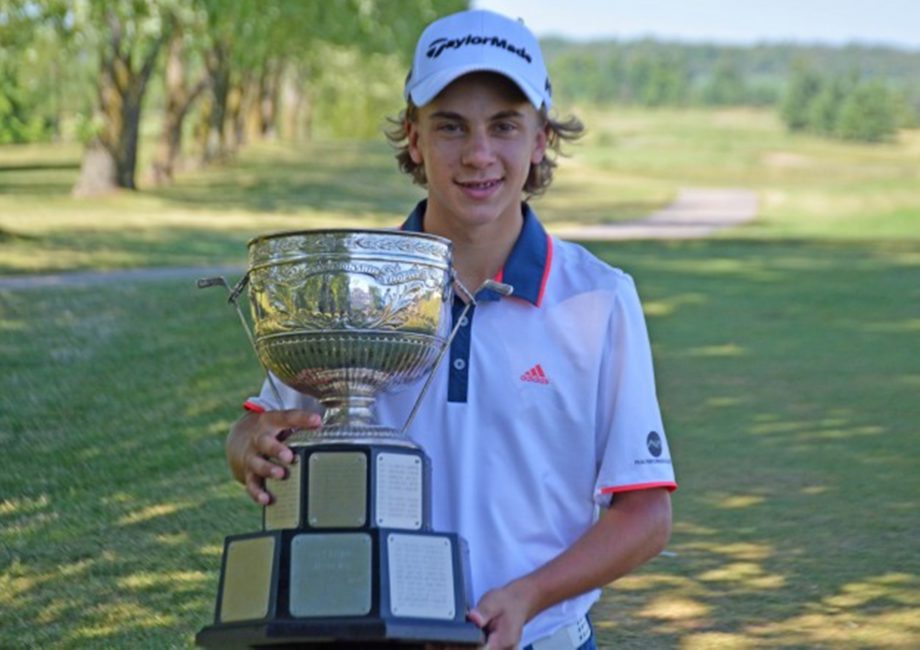 The 16-year-old from the Delhi Golf & Country Club entered the final round at Listowel Golf Club in a three-way tie for fourth place at 4-under. Playing in the second last group, the Team Ontario member birdied the opening hole. He added a second on the par-four sixth hole but bogeyed the eighth to make the turn at 1-under. On the back nine he made back-to-back birdies on holes 10 and 11 to move into a share of the lead. Callens bogeyed the 16th hole but made par on the 18th to capture the championship title at 2-under 70 for the day, and 6-under (71-67-74-70-282) for the tournament.

Callens spoke about what winning the championship meant to him. “Winning this event feels pretty good, it is one of the bigger events I have won. Winning both this and the Spring Classic means a lot to me, it has been a good Golf Ontario season, now I have to continue this play at the Canadian Junior.”

Callens admitted he wasn’t sure where he stood coming into the final few holes. “I hadn’t looked at the leaderboard. I thought I probably needed to get to 8-under to win. I was 7-under coming into 16 but I bogeyed so I thought I needed to birdie one of the last two holes. I got in with two pars and it turned out to be enough to win.”

For Callens, the strength of his game this week was his iron play. He talked about how it set him up on the greens. “I probably had at least 20 birdie putts inside 10 feet this week and that was all thanks to my iron play and ball striking.”

Now Callens will turn his attention to the Canadian Junior Championship. “My goal is always to win but this is the first time that I have played this event. I know it will be hard in Newfoundland, so I’m just looking to post good scores each day.”

Ancaster’s Ryan Murphy and Mono’s Isaac Maxwell finished the tournament at 5-under to secure their shares of second. Maxwell, from the Shelburne Golf and Country Club, began the day in sole possession of the lead and looked to be in good shape on the front nine. He birdied the first and fifth holes before a bogey on the seventh. He came back with a birdie on the eighth and was 2-under at the turn. It was the back nine where he faltered. A bogey on No. 11, followed by a double on 12 and another bogey on 14 created a swing that saw him give up the lead. Still, he managed to limit any further damage, carding a final-round 2-over 74 to finish the tournament at 5-under (75-66-68-74-283).

In addition to playing for the title, the top 34 golfers received a quota spot to play in the Canadian Junior Boys’ Championship, Aug. 1-4 at Clovelly Golf Course in St. John’s, Newfoundland. Team Ontario was also named for the team competition at the Canadian Junior Boys’ Championship. Representing Ontario will be Callens, Murphy and Sudbury’s Tristan Renaud who earned the spot with a playoff victory.

For complete tournament information, including the final leaderboard, see the tournament site here.