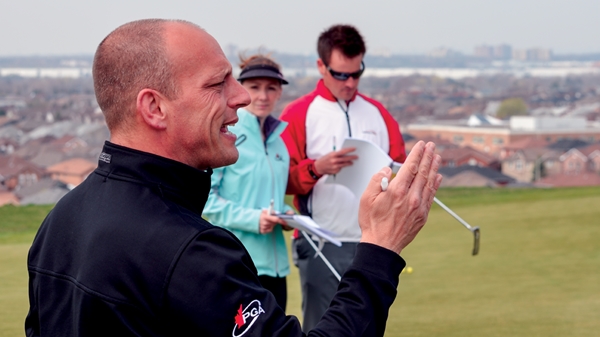 Created in 2012, the award is given each year to a coach who inspires and contributes to National Coaching Certification Program (NCCP) coaches in their community.

A driving force behind the construction and maintenance of the NCCP in golf, Cundari delivers webinars, conference calls and resources for fellow coaches within the industry.

“I’m honoured to be receiving this award,” said Cundari. “I’m as excited as ever to have coach education discussions with fellow coach developers, coaches and athletes from many different sports.”

Cundari is also an active member of the PGA World Alliance Education Committee, a group dedicated to learning how international golfing countries are educating their coaches. Cundari travels to developing golf nations to perform mission work.

“This award was created two years ago to nationally recognize people exactly like Glenn Cundari,” said Alain Roy, Director of Education Partnerships at the Canadian Association of Coaches. “As a multi-sport Learning Facilitator, and Master Learning Facilitator across all of golf’s three NCCP streams, Glenn’s commitment to sport, development, excellence, and lifelong learning has been fundamental to his capacity to inspire and motivate coaches around him. The CAC is honoured to recognize Glenn with this award.”

Additionally, two other Canadian golf coaches were recognized for distinction in their fields with awards at the event.

Ingram and Mullally are the first two golf coaches to ever receive these awards.

“Every year, the Coaching Association of Canada is proud to recognize coaches and coach developers for the positive impact they have on sport in Canada,” said Lorraine Lafrenière, CEO of the CAC. “These coaches demonstrate the values and core competencies of the National Coaching Certification Program (NCCP), and the positive impact that a coach’s passion, and dedication to the profession can have on an athlete in all aspects of their life”.