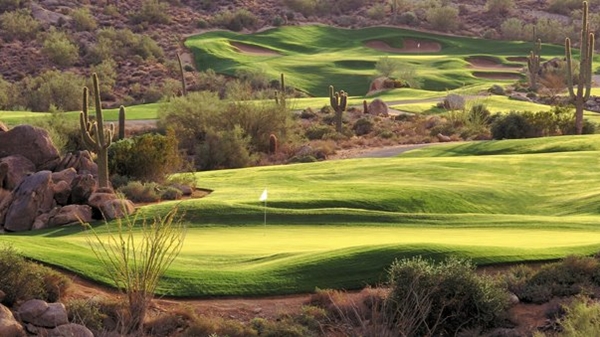 “We couldn’t be more excited to take the Titleist & FootJoy PGA Club Professional Championship of Canada to the southwest and SunRidge Canyon Golf Club in Fountain Hills, Ariz.,” PGA of Canada president Gregg Schubert said. “Since 2004 we’ve played this championship in Florida and it has been a very successful spot, but we feel moving west will attract more of our western PGA of Canada professionals.”

The move to Arizona comes after a 10-year run at PGA Golf Club in Port St Lucie, Fla.

At nearly 7,000-yards, SunRidge Canyon is hidden among the ridges and canyons in the foothills of the McDowell Mountains, widely considered one of the most picturesque and dramatic stretches of natural land in the southwest United States. The beauty and challenge of SunRidge Canyon has made it one of the most highly rated clubs in Arizona. The course was selected No. 42 on Golf Magazine’s list of ‘The Top 100 Courses You Can Play in the United States,’ and was the host of the 1997 USGA State Team Championship.

theScore has once again teamed-up with rising Canadian golf star Mackenzie Hughes, as the 23-year-old prepares to take the next big step in his professional career.

Hughes, from Dundas, Ont., makes his debut on the Web.com Tour tomorrow at the Pacific Rubiales Colombia Championship Presented by Claro in Bogota, Colombia. Hughes secured fully exempt status on the Web.com Tour after finishing first on 2013 PGA TOUR Canada Order of Merit, which included a victory at the Cape Breton Celtic Classic Presented by PC Financial and four top-10 finishes.

theScore sponsored Hughes throughout the 2013 PGA TOUR Canada season and will continue its support in 2014 as he graduates to the Web.com Tour. Hughes looks to finish inside the top-25 on season ending money list and earn full status on the PGA TOUR next season, alongside the biggest names in the world golf.

As part of the partnership, theScore will be giving golf fans an exclusive behind-the-scenes glimpse of life as a professional golfer through Hughes’ regular “Confessions of a Tour Pro” column, which can be seen in the PGA sections of theScore app and theScore.com.

“Mac is a great guy and a talented professional who has shown the potential to compete at the very highest level,” said John Levy, Chairman and CEO of theScore, Inc. “We’re so excited for him this year and pleased to be playing a part in helping him achieve his goal of competing with the very best on the world stage.”

“It’s great to have theScore backing me again this season,” said Hughes, a former member of Golf Canada’s National Team and Kent State University alumnus. “They’re a well-known Canadian brand and sports fans all over the world love their mobile apps.”

Nordqvist, a two-time winner on the LPGA Tour and winner of the 2009 LPGA Championship, will play TaylorMade metalwoods and irons and will wear adidas Golf apparel and footwear per her new contract.

The 26-year-old Swede turned professional in 2008 following a successful amateur career in both Europe and the United States which included Swedish Junior Player of the Year honors in 2004 and 2005, Pacific Athletic Conference (Pac-10) Player of the Year and co-champion honors in 2007, as well as membership on the victorious Swedish team at the 2008 World Amateur Team Championships.

In 2013, Nordqvist made the cut in all 26 LPGA events she entered, earning five top-10 finishes along the way. She competed in the Solheim Cup for the third time in her career (’09, ’11), where she finished with a 2-1-1 record for the victorious European Team and carded the first hole-in-one in Solheim Cup history.

“We are thrilled to welcome Anna into the TaylorMade-adidas Golf family as a member of our tour staff,” said Chuck Presto, Senior Vice President, Global Sports Marketing. “She’s an established and well-respected professional on the LPGA Tour that we’re proud to have representing our two brands in competition.”