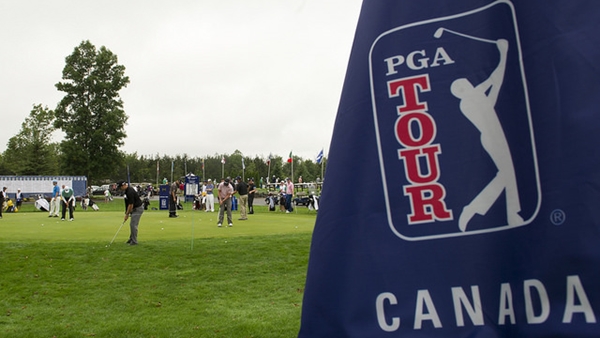 Oakville, Ont. and Ponte Vedra Beach, Fla. – PGA Tour Canada’s 2015 schedule will include 12 events from May to September and purse increases for each event from $150,000 to $175,000, as the pursuit to earn status on the Web.com Tour goes from coast-to-coast for its third season.

The season will once again begin in May with the PC Financial Open (May 25-31) at Point Grey Golf and Country Club in Vancouver and conclude in September at the Tour Championship of Canada presented by Freedom 55 Financial (Sept. 14-20) at Highland Country Club in London, Ont.

“Thanks to the hard work of our host organizations and the fantastic support of our sponsors, our 12 established Tournaments are all returning this season in a great position to continue to grow, with a significant increase in prize money,” said PGA Tour Canada President Jeff Monday. “We look forward to another season of outstanding golf from our players and an emphasis on positive community impact from our Tournaments,” added Monday.

In addition to the top five players on the Order of Merit earning status on the Web.com Tour for 2016, players 6-10 will once again earn an exemption into the final stage of the Web.com Tour Qualifying Tournament, with players 11-20 gaining direct entry into the second stage. Players competing on PGA Tour Canada will look to follow in the footsteps of Abbotsford, B.C.’s Nick Taylor, who finished 7th on the 2013 Order of Merit, then earned his PGA Tour card through the Web.com Tour before entering the PGA Tour winner’s circle at the 2014 Sanderson Farms Championship.

“The path Nick Taylor and his peers Tony Finau, Carlos Sainz, Jr. and Mark Hubbard used in parlaying their outstanding play on PGA Tour Canada into success on the Web.com Tour and now the PGA Tour is what we envisioned with the launch of PGA Tour Canada in 2013,” said PGA Tour Commissioner Tim Finchem. “We anticipate this year’s level of competition to be extremely high as more players look to follow in the footsteps of PGA Tour Canada alumni now on the PGA Tour.”

The top three players on the Order of Merit through the Staal Foundation Open presented by Tbaytel will once again be exempt into the RBC Canadian Open on the PGA Tour.

The season will resume with the ATB Financial Classic (July 27-Aug. 2) at The Links of GlenEagles in Calgary, Alta. Following a two-week break, the 2015 season concludes with five events in as many weeks, beginning with the National Capital Open to Support Our Troops (Aug. 17-23) at Hylands Golf Club in Ottawa, Ont. and The Great Waterway Classic (Aug. 24-30) at Loyalist Golf and Country Club in Bath, Ont., followed by The Wildfire Invitational presented by PC Financial (Aug. 31-Sept. 6) outside Peterborough, Ont., where the top 128 players on the Order of Merit will compete in a unique pro-am format. The Tour will then head east for the Cape Breton Celtic Classic presented by PC Financial (Sept. 7-13) at The Lakes Golf Club outside Sydney, N.S.

The following week, the 2014 season will conclude with the top 60 players on the Order of Merit competing at the Tour Championship of Canada presented by Freedom 55 Financial, concluding the race for The Five as well as the Freedom 55 Financial Canadian Player of the Year. Below is a full list of the events for the 2015 schedule.

“In addition to our current Tournaments, we will add new events to the schedule in the future,” said Monday. “Our goal in 2015 is to elevate the stature of our 12 Tournaments, with a focus on bringing new Tournaments to our schedule in 2016.”